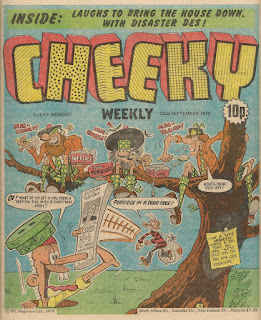 Disaster Des is singled out for a front-page mention this week, and the ever-reliable Cheeky/Manhole Man double act gets this issue off to a cracking start with a helping of cereal-based humour. Surprisingly, Uncle Hamish is not to be found among the Caledonian consumers of porridge who adorn this cover. As always, the fertile mind of Frank McDiarmid generates several additional gags around the page.


On Sunday the breakfast banter continues as Cheeky has another doorstep encounter with Bump-Bump Bernie.

Calculator Kid has a further grimy adventure (see the 16 June 1979 'Disco Special' issue), but with a happier outcome this time thanks to his electronic mate and a packet of Ker-Splat, the 'bionic' washing powder (as if it's not bad enough having 6 Million Dollar Gran repeatedly described as bionic despite her robotic nature, now the inappropriate adjective is being applied to laundry products).

Speaking of the mechanical marvel, this week's Gran story centres on Professor Potts' workplace (presumably he's still employed at the World Authority for Scientific Projects where he unveiled the aged automaton way back in Cheeky Weekly's first issue). Even the Prof himself is now describing the synthetic senior citizen as being bionic. Good to see Ian Knox drawing the traditional British comics' sausage-and-mash image, as well as the standard foreign spy. 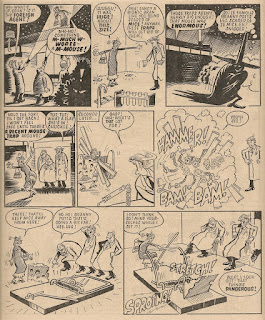 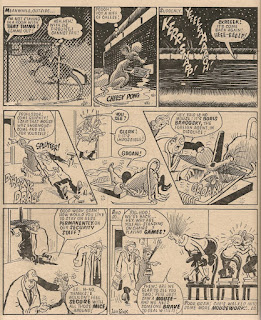 I wonder why the third panel of the Monday page has been composed of Mike Lacey's drawing of Mr Mutton from the previous issue and what looks like a pasted-in Cheeky.

Coastal calamities abound as front-cover-boosted Des enjoys a day at the seaside.


Elephant is still on the run in another agreeably bonkers escapade.

On the Chit-Chat page, reader Ian Walding of Bury St. Edmunds claims his 'regular order' of Cheeky Weekly is delivered by the postman. This seems unlikely since the small print at the foot of the same page informs us that 'subscription facilities (inland and overseas) are not now available'. A regular order with the local newsagent would most likely be delivered by a kid (not unlike Cheeky himself, except maybe for the profusion of teeth) on a bike, rather than the employee of Royal Mail to which Ian refers. Since our young chum admits his copy of the toothy funster's comic is usually delivered while he's still in bed, I suspect he has never actually witnessed his favourite funny paper's arrival on the doormat, and thus may be unfairly attributing the partly-masticated nature of his reading material to feline activity. I suggest that the paperboy/girl, aggrieved at not being recognised as the true source of young Master Walding's weekly dose of Cheeky chuckles, may quite possibly be indulging in a surreptitious nibble of frustration. 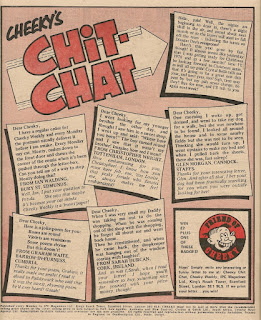 The Wednesday page sees the artwork duties handed over from what I have designated as Frank McDiarmid pencils (i.e. someone other than Frank inking his artwork) to another artist who I'm not able to identify.

Page 29 contains Cheeky Weekly's first advert for the Cheeky Annual 1980, the ad's design leaning heavily on the previous year's promotional announcement.
There is no particular theme to Cheeky's Saturday this week - it's just a continuation of the usual daily gagfest. Snail of the Century is absent from the comic for the second time since it began in the 14 July 1979 edition, and its usual back page haunt is host to a colour episode of Why,Dad, Why?


The front cover is the only pure Frank McDiarmid art this week. The Cheeky's Week artwork duties on this issue are shared between Frank McDiarmid pencils (the last time this collaboration will provide art for the comic) and the unknown artist who I have designated as Not Known. This is the only issue to which this artist contributed.

My thanks to Stephen Archer who has pointed out my assertion that Stage School appeared only once in the post-Whoopee-merge Whizzer and Chips was not in fact correct, since our junior showbiz chums turned up for a second time in Whizzer and Chips dated 13 July 1985. Not quite sure how I missed this when I was reading through my Whizzer and Chips collection.

I have now updated my Stage School post with a correction, and have also amended the affected Whizzer and Chips Raids posts, as well as my post on Whoopee's merge into W&C.

This is the second correction I've had to make regarding Stage School and its W&C appearances!

As I begin to write out 'I must be more diligent when conducting research into the post-Cheeky-Weekly appearances of those characters who survived not only the collapse of the toothy funster's comic but of Whoopee as well' 500 times, I'll leave you with Stage School's second Whizzer and Chips outing.

A week after Cheeky quietly slipped into comic history, Whizzer and Chips yet again featured a raid involving a survivor from Cheeky Weekly. Calculator Kid and Mustapha Million were by this point the only remaining representatives of the toothy funster's erstwhile comic.

Can you spot the unwelcome interloper? Scroll down, where the identity of the Whizz-kid weasel will be revealed... 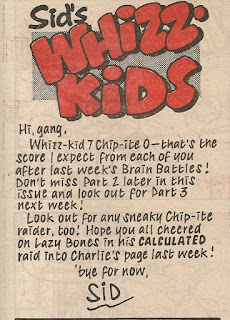 How Lazy Bones summoned the energy to ascend to his aerial hiding place remains a mystery.

Looked at out of context, the panel into which Benny Bones has been pasted would seem to depict the result of the lethargic lad's decision to use the tree as an arboreal lavatory.

This brings to 15 the number of raids carried out on our ex Cheeky Weekly Chums, who had by this stage embarked on 8 revenge raids across the border into Whizzer.