Cheeky had to contend with a number of annoyances while trying to enjoy the weekly Saturday morning picture show. Fearsome usherette Ursula and noisy nosher Crunching Chris had been tormenting our toothy pal in the cinema since Cheeky Weekly’s debut, but the 29th issue of the comic, dated 06 May 1978, introduced a new threat to Cheeky’s appreciation of the silver screen in the form of strident snorer Snoozin’ Susan.

The first time we saw Susan on any occasion other than Interval was on Sunday evening in Cheeky Weekly dated 24 June 1978. This was the first of her 8 appearances in that particular issue, throughout which she was accompanied by Do-Good Dora who was trying to ensure that Susan followed Doctor Braincell’s advice to get plenty of fresh air. Cheeky’s comatose crony slumbered through the week, but on Saturday we saw her awake for the first time.

It wasn’t until the comic dated 01 July 1978, the 9th issue in which Susan had featured, that she was rendered by pure Frank McDiarmid artwork (and even then all we saw were her recumbent legs and an arm).

Another instance of a conscious Susan was presented when Cheeky was given a glimpse of his future in the special issue dated 19 August 1978.

Two weeks after the toothy funster’s vision of the year 2038, the 1978 version of the sonorous slumberer again woke up in the cinema, this time because her foot had gone to sleep.

Susan was again roused from her dozing in the 21 October 1978 first birthday issue, on that occasion by Presto the rabbit’s magic carrot (and no, that’s not a euphemism).

The Saturday morning picture show sequence came to an end in Cheeky Weekly dated 02 December 1978 but Snoozin’ Susan appeared, in various Krazy Town locations and in her usual somnolent state, in a further 9 issues. She was the source of the Mystery Comic in the issue dated 14 April 1979.

Susan’s final Cheeky Weekly appearance occurred in the 29 December 1979 issue where she was seen (or at least her legs were visible) having a kip on the floor during  Cheeky’s Christmas party. This brought to 32 the number of Cheeky Weekly issues in which she appeared. Susan was never seen in Cheeky's strips in Krazy.

Almost entirely obscured by a miasma of detritus stirred up by Sid the Street-Sweeper's broom, PC Fuzzfoot made a single, non-speaking (but coughing) appearance in Cheeky Weekly dated 21 January 1978.


For some reason, Fuzzfoot was never seen again (maybe he felt that the Krazy Town beat was bad for his asthma and opted for a desk-based role instead), and Constable Chuckle made his debut 10 weeks later, going on to appear in 83 issues.
Posted by Niblet at 17:09 2 comments:

Page 30 in the debut issue of the toothy funster’s comic hosted the first page of the inaugural episode of Space Family Robinson, entitled (no sniggering) The Snatch. A week later the Robinsons’ exile on a faraway planet was once again the subject of the page in question, but issue number 3 saw Cheeky’s emergence from the Saturday morning picture show sharing the page with an assortment of sub-half-page announcements and ads, beginning what was to be a 8-week run during which the concluding part of Saturday shared the page with a similar mix of odds and ends.

The 31 December 1977 issue saw the Robinsons return to the subject page, but the following week a 4 week run of ads for IPC product commenced, featuring promotional pushes for Roy of the Rovers, Shoot and, in a campaign encompassing several humour titles, Whoopee!, Cheeky Weekly, Whizzer and Chips and Krazy, each of which was running a competition with kites as prizes.

Space Family Robinson then resumed occupation for 2 weeks, but were then ousted by the concluding part of Saturday again. The deep space perils faced by the Robinson clan then occupied page 30 once more, this time for an 18 week run, the conclusion of which coincided with the final episode of their epic interstellar adventure. The indomitable abductees were the second most regular occupants of page 30, with a tally of 23 appearances there.

Yet more thrills were to be experienced on page 30 the following week, as what was to be James Bold’s final Cheeky Weekly adventure, Island of Fear, commenced and was serialised in that location for the duration of its 6-episode run. Taking over from Bold as the adventure serial element of Cheeky’s Saturday morning picture show were the incredible airborne team Archie’s Angels who, like Bold before them, remained in the location under review for the whole of their 6 week escapade.

Further excitement was to be had a week later when Sonny Storm made his single Cheeky Weekly appearance.

In the comic dated 30 September 1978, the tedious duo Tweety and Sylvester brought humour (if you can call it that) back to page 30, but were ousted by more adventure a week later when the piratical perils of The Terrible Trail to Taggart's Treasure began to be documented, remaining in that location until the strip's penultimate episode

The issues dated 02 and 09 December were reduced to 28 pages due to industrial action, and Cheeky Weekly failed to be published for 3 weeks following that, but in the issue dated 06 January 1979 Saturday returned to the subject location. However, unlike the Saturday elements that appeared previously on page 30, which had been the conclusions to Cheeky’s weekly cinema visit, this time it was the first page of Cheeky’s 2-page Saturday; the cinema show sequence had come to an end in the edition dated 02 December 1978, after which the Saturday page depicted the toothy funster’s Saturday afternoon pursuits.

Saturday’s first page continued to occupy page 30 for a further 12 editions, but in the comic dated 07 April 1979 the Chit-Chat letters page made its single appearance in the location under review. In the 14 April 1979 issue the subject page was host to Easter Saturday, following which the bog-standard Saturdays resumed for a marathon 42 issue run, lasting until the final Cheeky Weekly dated 02 February 1980. Saturday was the most regular occupant of page 30, with a total of 65 visits (if we include all variants, i.e. Saturday 1/2, Saturday 2/2 and Easter Saturday 1/2).

Count of Elements (or distinct combinations thereof) appearing on Page 30

Bruce has posted a strip in which a certain invertebrate of our acquaintance embarks on a summer slither.
Posted by Niblet at 17:58 No comments: 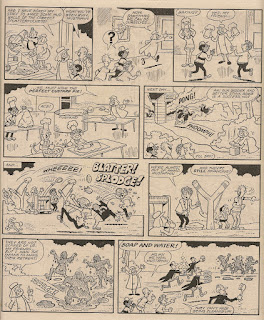 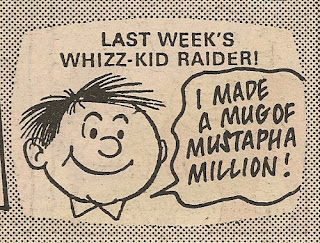