The final addition to the Cheeky's Week supporting cast, Ah Sew made his debut in Cheeky Weekly dated 27 October 1979. His name was of course a reference to the Japanese phrase 'Ah so' (although there were suggestions that he was in fact Chinese), punningly twisted in the Cheeky Weekly manner to allude to his profession as a tailor.


By the time of his second appearance (using Frank's artwork as featured in his debut), Ah Sew seemed to have been demoted to Tailor's Assistant...


I would guess that when Dick was given the script for the page above, he hadn't seen Frank's design for Ah Sew and as a consequence Frank's artwork from the previous week was cut and pasted in. It actually works well.


Ah Sew was created for Cheeky Weekly and never appeared in Krazy.

Bubblegum Boy, still floating high above the streets of Krazy Town, makes his 13th and final front page appearance this issue, sharing the cover with a character whose natural environment diametrically opposes his own airy lair. Yes, it's that other front cover stalwart, Cheeky's subterranean stooge Manhole Man, enjoying his 27th (and penultimate) cover gag with our toothy pal. Frank McDiarmid does the honours for this osseous rib-tickler, depicting the skeletons, which must be time-consuming to draw, with his customary aplomb.

Amusing detail in Calculator Kid - the hat which remains atop the post at the school gates.


Dick Millington gives us his Paddywack on the Monday page...

And on Wednesday Dick illustrates the only Cheeky Weekly appearance of Farmer Giles' Dad...

John Geering provides the artwork on Mustapha Million this week, the only occasion on which John drew the strip. 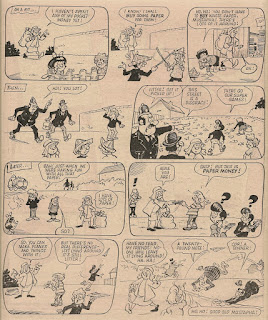 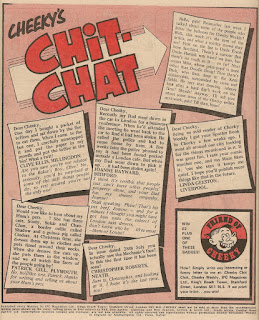 There's another artist providing a one-off delivery of artwork this week, as Paul Ailey draws Speed Squad. Like Mustapha's ghost-drawn strip earlier in the issue, this Speed Squad escapade focuses on money, but whereas Mustapha had surplus moolah to distribute, the Squad are in pursuit of the precious pound with which they've been entrusted.


Mike Lacey takes up the pen to furnish the visuals for the latter half of Cheeky's Week, including Friday, the occasion of Posh Claude's Dad's third and final appearance in the comic.

Cheeky's Saturday is devoted to doing the shopping for his mum, after which attention turns once more to the back garden as Snail of The Century brings the hilarity to a conclusion for another week. Frank McDiarmid delivers the front and back covers, with Dick Millington and Mike Lacey each contributing 4 Cheeky's Week pages.

The second page of Mustapha Million's debut adventure occupied page 25 in the first edition of Cheeky Weekly, and Mustapha's second page was again in the same location a week later. The Saturday element of Cheeky's Week came to rest on page 25 for the 2 subsequent editions, following which a Wile E Coyote strip represented the cartoon portion of that week's Saturday morning picture show.

Saturday's picture show was similarly located for the 5 subsequent issues, meaning that a variety of Warner Brothers animated characters were called into service to entertain Cheeky and his fellow youthful cinema patrons...

The placement of strips in the following week's Christmas issue was shaken up somewhat as a result of the festivities, leading to Joke-Box Jury making its first page 25 appearance. However, as things returned to relative normality seven days later, another run of cartoons commenced...


The Tweety and/or Tweety and Sylvester escapades listed above were untitled.


Saturday then returned to page 25 for 2 weeks following which the 'Beeps' of Warner Brothers' Road Runner appeared in the comic for the first time (in this strip the fleet-footed (if foot is the correct term for the thing at the end of an avian leg) bird was given the ability to speak, something he was lacking - as far as I'm aware – in the cartoons).

The following week a 9-issue run of Saturday commenced, a sequence that was interrupted in the comic dated 29 April 1978 by the appearance on page 25 of an advert for Funny Faces. If you're thinking that it was a bit early in the year to be promoting ice lollies, all will become clear when I reveal that this was not an ad for Wall's famous visage-based frozen treats, but instead a promotional push for packs containing a selection of cartoon-style eyes, ears noses and hats, plus a blank face on which to affix them. Sort of a 2-dimensional Mister Potato Head but without the carbs.

Saturday then returned for a week before being displaced again by an advert, this time notifying readers that a sufficient number of Trebor chew wrappers could be exchanged for Corgi Junior models of Batman's road, air and maritime conveyances. 60 wrappers would bag aching-jawed youngsters the whole Batload.

Saturday then resumed for what was to be a 3-week residency on page 25, until more advertising appeared there in the 10 June 1978 edition. This time it really was Wall's Ice Cream, who were hoping the summer weather would be conducive to emptying the nation's freezer-cabinets of their Tom and Jerry and Skateboard Surfer lollies.

Saturday returned for a week, but 7 days later the site under consideration was host to a competition of the 'spot the difference' variety, in which readers were tasked to identify the number of discrepancies between two similar images of Cheeky and Manhole Man, who were pictured enjoying a game of Gyro-Tennis as manufactured by M-Y Games. 30 of said bat-and-ball contrivances were on offer to the lucky winners. Surprisingly (to me, anyway), these games still seem to be in production.

Ads appeared on page 25 in the next 2 issues; 01 and 08 July 1978. The former saw Burton's promoting their Smax and Wagon Wheels products by way of a campaign in which skateboard posters could be obtained for 50p plus 4 tokens excised from the wrappers of the aforementioned comestibles. The latter ad was placed by Rowntree Mackintosh in relation to their wild-west-themed chewy confection known as the Texan Bar which at that time was, somewhat incongruously, offering purchasers a selection of prehistoric monster stickers.

The following issue saw Saturday commence another run, this time of 2 weeks' duration. Page 25 in the 29 July 1978 edition featured an ad for Trebor's Double Agents boiled sweets. Wrappers from the spy-inspired fruit drops could be exchanged for fingerprint kits. Parents would no doubt be delighted to find the furniture coated with fingerprint powder as a consequence.

A further week of Saturday ensued, and 7 days later Tweety and Sylvester pursued their ongoing feud in the subject location. In the comic dated 19 August 1978, Saturday began what was to be a 6 week run which brought to an end the feature's appearances on page 25 because the following issue introduced the Mystery Comic to its centre pages and Saturday was shunted further back as a result. Saturday was the second most regular feature to occupy the page in question, appearing there 27 times (including 01 April 1978's Saturday - April Fool's Day).

The following 2 issues saw Paddywack's particular brand of discombobulation abounding on page 24, but in the two subsequent issues Trebor were again encouraging widespread mastication of their products by offering what was described as 'jeans badges' (possibly they meant patches) in return for 20 wrappers.

Paddywack then resumed occupancy in the comic dated 28 October 1978, but this time sharing the page with a list of winners of the skateboard and tennis competitions that ran in the 17 and 24 June 1978 issues respectively.

The Friday element of Cheeky's Week then made its first visit to page 25, but its inaugural sojourn there proved to be brief, as 7 days later the welly-booted wonder Paddywack returned, although his was also just a single visit on this occasion as in the subsequent edition page 25 hosted an ad for Pirelli slippers.

Paddywack was featured on page 25 a week later, sharing that location with an ad for Cheeky Weekly's companion title Whoopee! Page 25 in the comic dated 02 December 1978 hosted the final appearance of Interval.

Luscious Lily Pop was to be found on page 25 in the following issue as she was grilled by Baby Burpo in the debut episode of The Burpo Special. Friday then returned, commencing what was to be something of a marathon run of 28 weeks in the location in question.

Readers' letters page Chit-Chat made a bid to secure page 25 in the comic dated 21 July 1979, and managed to hold on to the subject location for a further 3 weeks until obese oaf Tub made his only appearance in the site under review, his half-page adventure sharing that location with a list of winners of the Alpha Man competition. The following week saw Chit-Chat return to page 25, commencing a second run, which would extend to 3 issues. Yet more advertising of chewy confections ensued, as this time Barratt promoted their Oran-gee-tang bars for 2 issues.

Advertorial feature Whats, New Kids then moved in for 2 weeks, before Friday made its final visit to the subject location, bringing to 30 the number of times it graced page 25 (including 14 April 1979's Good Friday variant), making it the most regular occupant of the site under review.

What's New Kids returned the following week, after which the young performers of Stage School demonstrated their showbiz prowess for 3 editions. By this late stage in Cheeky Weekly's history, 6 Million Dollar Gran had suffered something of a demotion, as her stories had not only been reduced from 3 pages to 2 (and sometimes just 1), but the aged automaton had been relegated to the rear of the comic. Thus the synthetic senior citizen landed up on page 25 for 2 editions. Page 25 in the 01 December 1979 comic was home to 2 ads for IPC product; Look and Learn, which was running a competition to win an adventure holiday in Sudan, shared the location with an ad for that Christmas present stalwart, the mighty Whizzer and Chips Annual.

Robotic ructions were again in evidence on page 25 as Gran moved back commencing with the issue dated 08 December 1979 for what was to be a 3 week residency until a reprinted adventure featuring double-decker-dwellers The Gang displaced the creaky contraption. This was the only time that The Gang featured on page 25.

Gran returned to page 25 in the 05 January comic, and remained there for 2 issues until her normal strip was interrupted when she was the subject of a spot the difference puzzle.

6 Million Dollar Gran then resumed her page 25 run for the 2 issues that remained before Cheeky Weekly ceased publication. Gran was the third most regular occupant of the subject location, appearing there on 9 occasions in her normal strip and once as the spot the difference subject.

Warner Brothers' characters appeared on page 25 in a total of 12 issues, but since the strips were named after the individual characters, I haven't included them among the top 3 features. And as far as I'm concerned they were little more than filler material.

Count of Elements (or distinct combinations thereof) appearing on Page 25