In the 31 May 1986 edition of Whizzer and Chips, Calculator Kid was again the subject of a Whizz-kid raider. Can you spot the crafty interloper? Scroll down to see Whizz-kid supremo Sid spill the beans.

As with the previous raid documented in this series, the Calculator Kid reprint (in this case from a colour episode in Cheeky Weekly dated 28 July 1979) has undergone some modifications in addition to the placement of a raider. 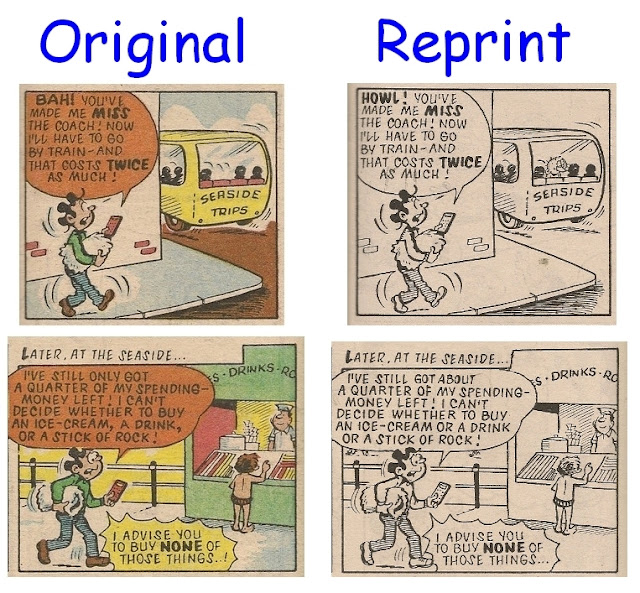 Maybe it was felt that by 1986 'bah!' was something of an archaic expression of frustration. The reason for the change to Charlie's subsequent comment in the second example above is less clear. I could have understood if  the word 'still' had been removed. Possibly the decision to substitute the comma after 'ice-cream' with 'or' and remove the second comma in the same sentence was intended to emphasise Charlie's dire financial dilemma by making it clear that he could afford only one of the seaside treats listed. The exclamation mark in Calc's reply has been replaced with a full stop.

Sid was clearly orchestrating something of a vendetta against Charlie and Calc, as this was the eighth time he had sent a raider into their strip. The ex-Cheeky Weekly folk had by this point been raided on 19 occasions, having undertaken raids into Whizzer just 9 times.