The features - What A Cheek 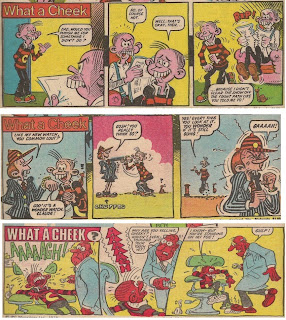 The What A Cheek strip was a cover feature consisting of a 3 panel gag. Cheeky always delivered the punchline, and the strip usually featured one of the regular characters from the Cheeky pages, but sometimes anonymous stooges appeared.

The feature was absent from some covers when a competition or promotion was publicised, and it didn't appear on the Christmas 1977 issue.

Having appeared since the first issue, What A Cheek came to an end in the 23 September 1978 issue, and was eventually replaced by the Cheeky's Week feature which initially was the same format with a different title, but later expanded to fill the front cover and consequently had more panels.

The title What a Cheek was later revived following Cheeky Weekly's merge into Whoopee!, where the resurrected strip of the same name appeared in 28 issues of the amalgamated comic.

Page History in the first table above shows the page numbers occupied by the strip in its run. As this was a cover feature, it only ever appeared on page 1.
Posted by Niblet at 15:53

Email ThisBlogThis!Share to TwitterShare to FacebookShare to Pinterest
Labels: Cheeky Weekly, Feature, What A Cheek