The front cover of issue 2 uses the same image that featured on the back page of the first edition, showing an impossibly-contorted Cheeky offering up this week’s free gift prominently for our inspection. On view are the colours of the four Fun Wallet variants, although two wallets seem to be almost the same red/orange hue but that's probably due to the shortcomings of the comic printing process – there’s a noticeable lack of colour gradients on this cover compared to the last. The colours are much ‘flatter’ this week. Presumably more money was spent on the slightly more sophisticated colour printing of the cover of the launch issue to make it more appealing.

A rather blank-faced Snail stares out of the cover, and slithers into the What a Cheek strip where our toothy pal engages in bus banter.

On page 2 Cheeky welcomes us to the comic, and asks readers to tell all their pals about his new title. Below that is the announcement of the Fun Phone – readers are asked to dial a number and submit their jokes. Those whose gags are published will receive the rather unspecific ‘pocket money prize’ (later revealed to be £2). 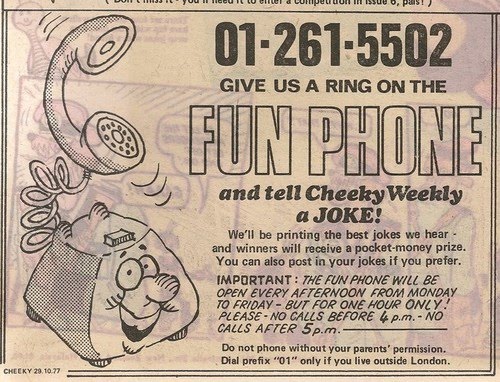 Jokes submitted via the short-lived Fun Phone (this method of reader communication was eventually withdrawn in January 1978 due to a ‘technical problem’ - I suspect the editorial staff soon regretted making an office telephone number available to their readership) would be printed in the Joke-Box Jury feature which commenced in the 10 December 1977 issue.


This week’s issue follows the pattern set by the first – we follow the grinning gagster throughout his week, starting with his Sunday morning newspaper round, and his pages frame all the non-Cheeky strips.

Knock-Knock Door, a surreal ‘character’ Cheeky fans first saw in Krazy’s debut issue, makes its inaugural Cheeky Weekly appearance this week. Cheeky’s Mum, whose voice was heard/read in last week’s issue although she wasn’t seen and has never featured in Krazy, appears for the first time. Mum doesn’t fare much better this week to be honest, as it’s only her right arm on view, untroubled by the anatomical inaccuracy afflicting her offspring on the cover this week. Funny fishmonger Mr Haddock also makes his first Cheeky Weekly outing, although a similar-looking seafood vendor named Mr Codface had previously purveyed a plethora of piscatorial puns in an issue of Krazy. Also dropping in for the first time is Parachutist.

The book from which Cheeky selects a terrifying bedtime story is for the first time given a title - Creepy Sleepy Tales – this week.

Last week’s centre spread poster featured, naturally enough, Cheeky, and this issue the accolade of a centre-page Pin-Up Pal poster is awarded to 6 MillionDollar Gran, who is depicted leaping over 6 parked cars in the manner of Evel Knievel, although Gran of course achieves this feat without resorting to a motor cycle. Gran’s poster appearance this week suggests that the editor is confident she will be among the most popular characters in the comic.

The poster is of course in full colour, but there’s a rather strange distribution of colour pages around the comic this week – the front and back covers feature full colour printing which is to be expected (the back page is occupied by an advert for Standard Fireworks). But as well as the centre spread, page 8 (the Monday element of Cheeky’s week) is also in full colour. Across the staples, the other half of the sheet of paper that carries page 8 is page 25, and one would normally expect colour pages to be paired up, but page 25 is the second of Mustapha Million’s pages this week, and is printed in monochrome to match his first page.

Whereas the animated cartoon element of the Saturday morning pictures programme was represented last week by a Wile E Coyote/Roadrunner strip, the same function this issue is performed by Cocky Doodle and Bam, Splat andBlooie reprints from Buster.

After Cheeky and his pals exit the cinema on page 31, our toothy pal informs them (and us) that a metal badge will be given away with each of next week’s issues of Cheeky Weekly.

Frank McDiarmid draws all 13 Cheeky's Week elements in this issue.