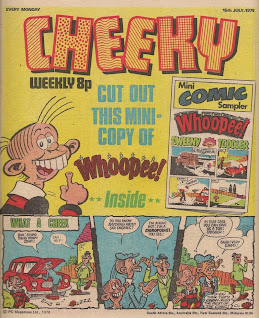 As we hit week 3 of IPC's humour-title mini comic promotion, Whoopee! is this week's guest comic, and Cheeky is on the cover, pointing in not-quite-the-right-direction.  Below, Barrie Appleby provides the What a Cheek art for the second week running as Cheeky's flat-capped dad, making his fourth What a Cheek appearance, suffers car trouble.

On Sunday evening Cheeky leaves a dummy in his bed to fool mum, and heads over to Six-Gun Sam's house to watch 6 Million Dollar Gran on TV.  In the Gran strip, the robotic pensioner stands in on the paper round of her 'grandson', Pete Potts, who's feeling a bit poorly.

Flash Harry is this week's 'throughout Cheeky's Week' character, as he tries to get a snap that will win the most-unusual-photo-of the-week competition.  Unfortunately, Harry just misses some excellent photo-opportunities.  For example, on Tuesday an un-bandaged Bump-Bump Bernie hoves into view.  Harry tells Bernie to take a couple of steps back so that he's nicely framed, but Bernie falls down an open manhole.  Someone really should get in touch with Health and Safety about Manhole Man's habit of leaving his aperture uncovered.


On Monday it's Teacher's turn to read the mini comic in class, as he snatches it from Cheeky who was hoping to have a sneaky read after being made to stand in the corner.

On page 15 is news of a super 5-papers competition next week, with 1500 outdoor-type toys to be won.  Readers are urged to order their copy of next week's issue now, and a coupon to fill in and hand to their newsagent is helpfully provided.

In an ad on the following page, the Green Cross Man and an un-named younger character in a smaller version of GCM's uniform (Green Cross Boy?) who remains silent throughout, teach Sara and Tim to cross the road safely by using the Green Cross Code.  Unlike the subjects of some Green Cross ads, Sara and Tim do not have a near-miss due to transgressing the laws of the road prior to the appearance of our highway hero, the story just starts with all interested parties standing at the kerb.  Personally, I think the campaign would have been more effective if Lily Pop had been dishing out the advice.

Mustapha Million is reduced to a single page again this week, but Reg Parlett is back on the art after Joe McCaffrey deputised last week.  Toddler terror Baby Burpo makes a guest appearance in the Calculator Kid strip.

Mike Lacey provides the bulk of the Cheeky's Week art, turning in 10 elements, with Frank McDiarmid pencils and Barrie Appleby giving us their Wednesday conclusion and What a Cheek respectively.  Possibly the absence of pure Frank McDiarmid art in this issue and last week's is because at the time this edition was being prepared Frank was working on the 1978 Cheeky Summer Special.