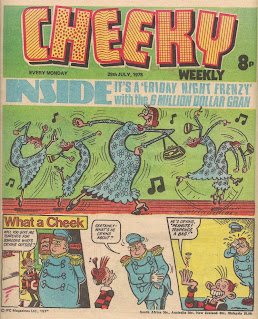 Things return to something like normal this week, after the disruption to the regular contents due to the presence of mini comics in the 4 previous issues.  Gran boogies on down in the main cover pic, the second time she has been the star of the cover feature.  Meanwhile the cinema commissionaire, whose dialogue is usually restricted to the phrase "The doors are…", before he's trampled by hordes of kids on Saturday morning, gets to be Cheeky's stooge in What a Cheek.

The kids of Krazy Town are enjoying the first week of the summer holidays this issue, so because there's no school on Monday, Cheeky doesn't need a ruse to stay up on Sunday night to watch 6 Million Dollar Gran.  As we saw on the cover, in this week's Saturday Night Fever-inspired episode, Gran goes to the cinema to watch Friday Night Frenzy, but her over-enthusiastic dancing along to the soundtrack results in her being ejected from the building.  However, our favourite synthetic senior citizen then foils a security van heist and recovers the cinema's takings, after which she's allowed to watch (and dance along to) the film as many times as she likes. 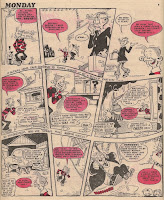 Podgy pedagogue Teacher is enjoying being free of Cheeky so much that he appears on 5 Cheeky's Week pages this issue, even getting hold of The Mystery Comic before Cheeky can lay his hands on it.

On Wednesday Cheeky is dismayed to find that Burpo's cousins are back (the last time we saw them was in the 06 May 1978 issue), so the toothy funster regales the belligerent babies with a Creepy Sleepy Tale concerning a giant snake.  Or at least he starts reading the story to a room full of Burpo-alikes in their cots, but in the Wednesday conclusion only Burpo himself is depicted.  Creepy Sleepy Tale is back in full colour for the first time since 24 July, the full colour internal feature pages having been shared between the mini comics and Calculator Kid in the intervening issues.

For the last 3 issues Mustapha Million was reduced to a single page each week, but he's back to the normal 2 page tale this week.

For the first time since its debut on 01 July 1978, the Calculator Kid strip is in black and white.  Charlie Counter and his calculating colleague enjoyed the spare colour page that was available because one colour feature page was devoted to the mini comics in the last four issues, but as mentioned above, the two colour pages have now been reallocated to Creepy Sleepy tale.

On Saturday Cheeky has his first encounter with the time-travelling phone box, which whisks the toothy funster back to 1492 for a brief meeting with Christopher Columbus.

In the final panel of the Saturday strip, Teacher ominously tells Cheeky and his pals, "I'm going to get my revenge on you lot for all you've made me suffer in school - by behaving even worse than the worst of you! Hee! Hee!".

Rounding off the comic is the Pin-Up Pal feature, returning after being absent since the comic dated 17 June 1978, and depicting Bump-Bump Bernie, bandaged head-to-foot, on crutches and about to make contact with a banana skin.

This issue's Cheeky's Week consists of 11 pure Frank McDiarmid elements, plus the Wednesday conclusion by Frank McDiarmid pencils.  There is a joke running through the background in the internal Frank McDiarmid pages this week, featuring a sleepwalker wandering (often in precarious circumstances) in his pyjamas around Krazy Town.  Pure Frank art is also on display in the Pin-Up Pal poster.

The Old Comic feature is absent, as it has been for the last 3 issues, but will return one more time.