Being born in the mid-1950s, I'm of the generation whose early instruction on how to negotiate a safe course across the road came in the form of public information films on TV, starring one Tufty Fluffytail.  Tufty the squirrel had a pal called Willy Weasel who was prone to run into the road without checking for traffic, and suffering consequential trauma to his ice cream cone.  These ads were probably considered shockingly explicit for young TV viewers of the time, so in the example below the moment of impact is mercifully obscured by the ice cream van.

The simplistic advice offered by the Tufty films (such as 'always take mummy with you') was clearly due for an overhaul by the mid 1970s, so step forward Green Cross Man, bold road-safety superhero for the late 20th century.  Played on TV by Dave 'Darth' Prowse, the Green Cross Man was an attempt to make the subject of road safety cool and exciting.  In the example below Dave's lines have been overdubbed by another actor but unlike Dave's appearances in the Star Wars series, later Green Cross films did use Dave's voice.

As well as appearing during teatime TV, Green Cross Man also used the medium of comics to disseminate his traffic-avoidance strategies, and during Cheeky Weekly's run, Green Cross ads were run on 4 occasions.  In 1978 a single page ad entitled Sarah and Tim Learn the Green Cross code appeared twice.  The Green Cross Man in these ads was clearly based on Dave Prowse, and also featured was an unnamed Green Cross sidekick, who I don't recall seeing in any of the TV campaigns. 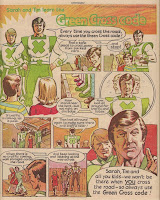 A double-page Green Cross ad entitled Football Crazy appeared twice the following year, and once again the carriageway crossing crusader's appearance was based on Prowse.  As was the case with the TV campaign, the comic Green Cross ads warned kids that the street-safety superhero wouldn't be there when they crossed the road (presumably to avoid kids hurling themselves into traffic in the hope of summoning the green guardian). All the ads were printed in full colour. 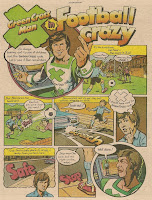