Mechanic first appeared in Cheeky Weekly issue 1, when the toothy funster passed the local automobile workshop on his way to the cinema and spotted a pair of legs protruding from beneath a car.  Cheeky posed a car-related riddle to which the legs provided a reply, but in all subsequent encounters Mechanic provided the feed line to which Cheeky would reply with a pun based on the name of a car model or a mode of transport.  Mechanic was usually depicted under a car, but occasionally he would have his head beneath the bonnet - Mike Lacey was the artist who most regularly drew him this way. 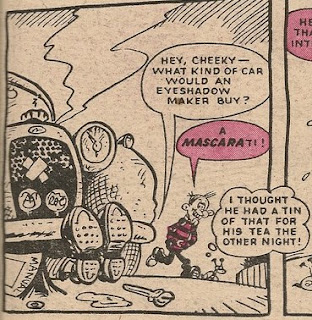 Mechanic appeared in 100 issues of Cheeky Weekly, making his final foray into the comic in the penultimate issue.

The first time we saw Mechanic in an upright position was in the 21 January 1978 issue, where Cheeky passed him in the newsagent, but the comical car-repairer's face was hidden behind a newspaper. 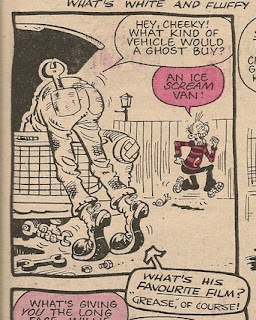 Cheeky joined Mechanic under the car in the 15 April 1978 issue, as the toothy funster tried to avoid Do-Good Dora's collecting tin.

In the 17 June 1978 comic it was Mechanic's turn to feature throughout Cheeky's Week, as he and Cheeky traded a succession of car gags, and on 3 occasions in this issue Cheeky joined mechanic under the car.  On Saturday we saw Mechanic pushing his new car (he'd spent all his money on the car so had no funds to fuel it), but once again his face was obscured.  It was in the same issue that we learned Mechanic's name was Mick, but this was the only occasion on which he was referred to by name. 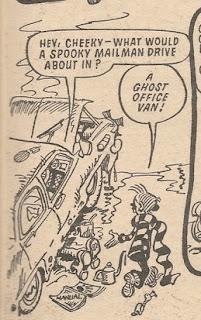 The 12 August 1978 issue saw Cheeky and his mum and dad go on holiday in a barge, and that week the toothy funster met Mechanic on the canal as he worked on the engine of a boat.

On Monday in the 13 January 1979 comic we saw Mechanic under Cheeky's dining table, where he had been since Cheeky's new year party the previous night. 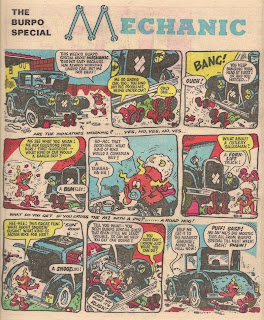 We first saw Mechanic's face in the issue dated 28 July 1979.  Mechanic's mug was on display again in the comic dated 29 December 1979, in which Cheeky mistakenly remarked that we were seeing the car-repairer's face for the first time.  To be fair to Cheeky, I believe that the page in question was prepared for one of the issues that failed to appear in December 1978 due to industrial action, so had it appeared when originally planned, Cheeky would have been correct.


Mechanic was back under Cheeky's dining table during the toothy funster's new year party in the issue dated 05 January 1980.

Mechanic was the subject of 12 May 1979's Burpo Special, and he made it onto the cover of the comic dated 04 August 1979.  Cheeky's Cut-Out Comedy Catalogue Of Mechanic Jokes was featured in the 15 December 1979 issue.


Mechanic - Number of appearances by Element


Mechanic - Number of appearances by Page


Count of elements by artist
Posted by Niblet at 00:12