Ever wondered what Cheeky and pals would look like if rendered by the hand of Robert Nixon, another of the great British humour comic artists?  Well, Whoopee! dated 03 January 1981, published just under a year after Cheeky Weekly had merged into it, included a calendar drawn by Robert.  Featured on the calendar along with stalwarts of Whoopee! was the toothy funster and some of his chums. 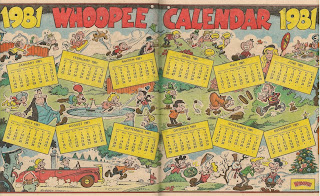 It was customary that, following a comic merge, the comic which had been absorbed into the more successful title would get 'second billing' on the cover for a period of time. The issue that contained this calendar doesn't contain any reference to the merged comic on the front page, although the preceding and following issues did mention Cheeky on their covers.  The final issue of Whoopee! to include a reference to Cheeky on the front cover was that dated 25 July 1981.  I suspect that's the reason why the calendar above is called the Whoopee! calendar, rather than Whoopee! and Cheeky - it was known at this stage that by the end of the year the Cheeky billing would be dropped.
Posted by Niblet at 23:47

Email ThisBlogThis!Share to TwitterShare to FacebookShare to Pinterest
Labels: Robert Nixon, The Other Artist's Cheekys, Whoopee