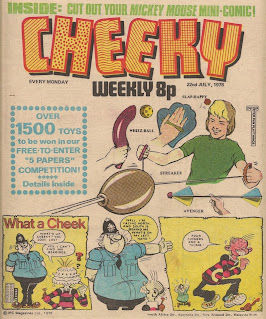 We're now in the final week of IPC's summer '78 mini comics promotion, but unlike the 3 previous issues, this week's guest title, Mickey Mouse, isn't the subject of the main cover feature.  While the guest comic is mentioned in the above-title banner, the cover leads with this week's competition to win Peter Pan Playthings toys.  Cheeky is helping Constable Chuckle with his enquiries in the What A Cheek strip, during the course of which the toothy funster's skin goes from pallid yellow to sunburnt red.  Pure Frank McDiarmid art appears on What a Cheek for the first time since the issue dated 24 June 1978.

Barrie Appleby gets Cheeky's Week off to a start on Sunday, when the Skateboard Squad seem to delight in knocking our toothy hero off his feet.  I'd always assumed their collisions with Cheeky were a result of over-enthusiasm, but there seems to be an element of malice this week - note Skatie's evil leer.


On Sunday evening Cheeky announces that he's determined to get a ball past Goalie Cat, even if it takes all week.  As we know, Cheeky always kicks a tin can at the feline footballer, not a ball, and it looks to me as though a ball was originally drawn in Goalie Cat's paw in this panel, but someone has drawn a can over it. 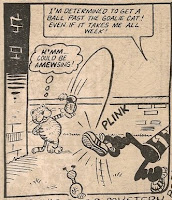 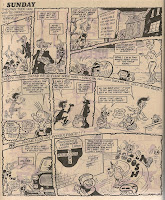 Mike Lacey does the art on this week's 6 Million Dollar Gran episode, standing in for regular artist Ian Knox for the second and final time.  As with the 2 previous issues, Gran's adventure is reduced to 2 pages from the usual 3, no doubt due to the presence of the mini comic.

Details of the cover-announced '5 Papers' competition are given on page 7.  The word 'papers' seems a rather archaic way of referring to what most kids of the time called comics.  The 'papers' concerned are Cheeky Weekly (of course), Buster, Whizzer and Chips, Whoopee! and Mickey Mouse.  Readers are asked to count the number of overlapping circles in a panel, write the total on a coupon and post it off.  They're also reminded that the coupon is available in the other 'papers', so why not buy an extra comic for another chance to win?  Aaah, but are there the same number of circles in all the comics?.  There is £3000.00 of prizes, consisting of outdoor toys manufactured by Peter Pan Playthings, one of which is the Streaker which I discussed here.

On Monday Cheeky has his final furtive read of a mini comic in class as he conceals this week's miniature version of Mickey Mouse inside his text book.

There's an epidemic of people turning into scarecrows in this week's Creepy Sleepy Tale.  CST is printed in glorious black and white as it has been for the last 3 weeks due to one of the available colour feature pages being devoted to the mini comic, leaving a single colour page which has been allocated to lucky Calculator Kid.

Joe McCaffrey is back doing the art on Mustapha Million this week, the third time he has stood in for original artist Reg Parlett.

By Saturday, Cheeky still hasn't managed to get a shot past Goalie Cat, who turns up with his moggie mates, and the gang of footie-mad felines proceed to kick tin cans, old boots and footballs at our toothy hero.

Barrie Appleby delivers the bulk of the Cheeky's Week elements in this issue, doing the art on a total of 11 elements.  Pure Frank McDiarmid art features on What a Cheek only.