Employed by bakers Burnitt & Scorchit to transport a tray of cakes around Krazy Town for no apparent reason, the Baker's Boy repeatedly fell victim to Cheeky's challenge to answer a riddle or forfeit one of his goodies.  In the 28 January 1978 issue, Cheeky set Baker's Boy the riddle 'what's black and white and fast?' on Sunday, and allowed the purveyor of pastries a whole week to supply the right answer.  Despite making valiant attempts to provide the correct solution each day (with, according to Cheeky, an extra 2 attempts on Friday although I can only see one), the hapless comestible conveyor eventually lost 9 of his confections to our grinning hero the following Saturday, on learning that the correct answer is 'a jet-propelled domino'. 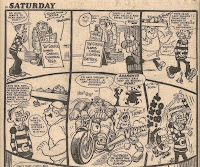 It wasn't just Cheeky who preyed on the Baker's Boy's wares, a bird also appeared when Baker's Boy was drawn by Unknown Cheeky Artist1, gorging itself into ornithological obesity.

In another example of the inconsistencies that appear in Cheeky Weekly, the name Scorchit on the Baker's Boy's tray is sometimes spelled Scorchitt. Sometimes there are no names on the tray. 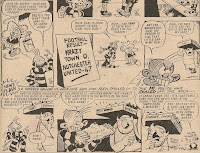 Baker's Boy featured in 99 issues of Cheeky Weekly, most regularly appearing on the Monday page.  In the 13 May 1978 issue, Baker's Boy appeared in the Skateboard Squad story, and he was one of the guests at Pete and Pauline Potts' party in the 6 Million Dollar Gran strip in Cheeky Weekly dated 06 October 1979.

Cheeky's cake-toting source of nourishment originally appeared in the first issue of Krazy dated 16 October 1976, and made regular appearances in that title.