Despite the inclusion of the second part of the Top Ten poster, there's no mention of it on the cover. One might have expected the Cheeky Weekly editor to advertise the poster's continuation as a reminder to comic fans in possession of last week's issue but vacillating over the tempting titles strewn before them across the newsagent's counter. Nevertheless, the comic dives straight into Cheeky's Sunday paper round encounters with Bump-Bump Bernie and luscious Lily Pop.

There's trouble on the tracks in this week's 6 Million Dollar Gran episode, which features some typically eccentric work from artist Ian Knox – I enjoyed the train rearing up on its hind wheels as the synthetic senior citizen super-stokes the boiler. 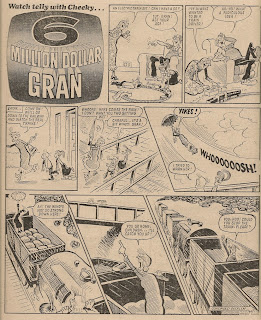 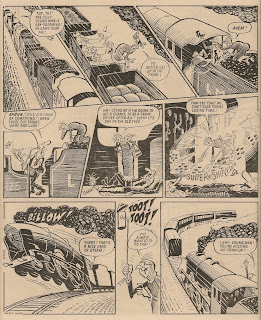 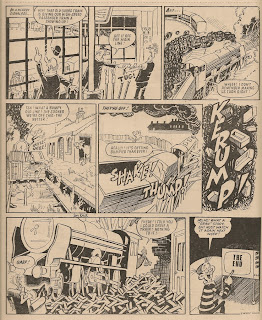 One of this week's Paddywack jokes is contributed by sci-fi fan Wayne Bruce of Hornchurch, who had a letter published on the Chit-Chat page in Cheeky Weekly dated 13 January 1979. I'm still not sure whether his name is genuine.


Cheeky's regular search for The Mystery Comic leads him to somnolent schoolgirl Snoozin' Susan, who is using a copy of said perplexing publication as a pillow while enjoying a park bench doze.

Mystery Comic cover star Tub's tale is a variation on the old fox, chicken and sack of corn conundrum – in this case Dad's task is to ensure that he, Tub and (most importantly) a picnic lunch are transported in safety across the river.

Cheryl Ladd and the members of Blondie are the subjects of this week's instalment of the Top Ten poster (occupying 4th and 7th position respectively), and the quality of the photo reproduction hasn't improved since last week.

At this point in Cheeky Weekly's history, the toothy funster would locate his copy of the Mystery Comic every Wednesday and therefore, within Cheeky Weekly's daily chronology, the events depicted in the Mystery Comic section are related to Wednesday 11th April. Thus, readers may consider Disaster Des' Easter egg – based Mystery Comic contribution to be rather premature (Easter Sunday in 1979 fell on 15th April), but printing his story in next week's issue, its Mystery Comic location associating it with 18th April, would render it rather late for Easter celebrations.


For the second week running, IPC's promotional Star Guest feature (on this occasion hosting Sweeny Toddler from Whoopee!) intrudes upon the pages of The Mystery Comic.

The Mystery Comic rounds off with Mustapha Million, followed by an ad for KP's salty, space-themed snacks, Outer Spacers, informing consumers of the crunchy cosmic crisps that their purchases entitle them to enter a competition in which Raleigh bikes can be won.


The father and son team from Why, Dad, Why? are absent from this week's Mystery Comic section, bumped by Sweeny's Star Guest appearance.

The image of Cheeky without his shirt appears for the third consecutive issue – it originally graced the cover of 31 March 1979's Jersey issue, then appeared again on last week's front page, and now turns up pasted into the final panel of the Thursday page. This suggests that the original final panel introduced the Skateboard Squad who are absent from this issue, necessitating a swift cut-and-paste and change of dialogue to herald a half-page Joke-Box Jury. Maybe the staff artist who did the alteration still had the image he had cut out for use on last week's cover.


IPC missed a sales-boosting opportunity by not mentioning that Skateboard Squad fans missing the intrepid trio can see them making their own Star Guest appearance in this week's Whizzer and Chips.

Cheeky's final outing for the week, Easter Saturday, takes him to the YMCA, where our toothy pal enjoys his first encounter with mirthful mesmerist Hypno-Tessa. 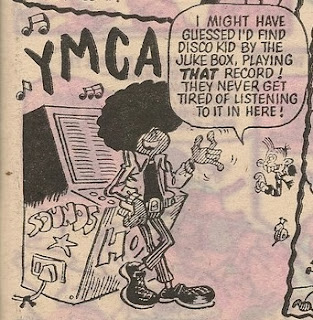 The issue reaches a conclusion with the back cover's Burpo Special, the subject of which is affable agrarian Farmer Giles.

Pure Frank McDiarmid art tops and tails this edition, with his front cover Cheeky's Week...Sunday and the back cover Burpo Special. The eight internal Cheeky's Week elements are drawn by what I believe is an artist collaboration that I refer to as Frank McDiarmid Pencils (see link under Thursday image above for more details).

This is the only issue of Cheeky Weekly to identify Good Friday and Easter Saturday. The equivalent days in 1978 were shown as Friday and Saturday.