The issue of Whoopee and Wow! displayed below joined the array of comics vying for attention on newsagents' counters in August 1984. Four and a half years after Cheeky Weekly had been merged into it, reference to the toothy funster's comic had long since been dropped from Whoopee's cover, not least because another failed title, Wow!, had been absorbed just over a year before this issue appeared, and thus gained the companion title slot.

However, all the survivors who had jumped ship as a holed-beneath-the-waterline Cheeky Weekly sank into comic history continued to appear in Whoopee and Wow! at this time, although their fortunes had varied considerably as the post-Cheeky Weekly months progressed;

This looks a bit odd to me; Gran is the only character in the strip to display a shadow on her body, and casts no shade on the ground to her right. Also her unspecified 'Yak Yak', and indeed her very presence, seems to be entirely ignored by the other characters in the frame. As you can see below, Gran plays no further role in the strip. Strange. Maybe the aged automaton's presence was meant to suggest that Sweeny's Great Grandpa was a member of Gran's Gang. 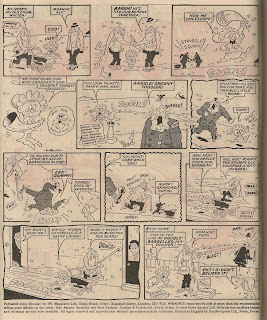 For the benefit of anyone puzzling over the teaser in the Family Trees cover appearance...