Profiles – The Other Cats of Krazy Town – Scruffbag and Tired Tom

Goalie Cat was of course the most frequent feline participant in the Cheeky’s Week pages, appearing in 71 issues, but there were two other memorable moggies among the supporting cast.

A number of anonymous felines featured on the Cheeky pages during the early months of Krazy, the first to appear being a rather scruffy, wind-swept individual sporting a plaster on his rump who made his unnamed debut in the 04 December 1976 issue.


We were formally introduced to school cat Scruffbag in Krazy’s 02 April 1977 issue, some 7 months before Cheeky’s own title shouldered its way onto newsagents’ shelves.


The lethargic animal evidently suffered some trauma to his rear end during the summer of 1977 as his trademark bandaged tail became evident in Krazy's 02 July 1977 edition.


Scruffbag’s Cheeky Weekly debut came in the 05 November 1977 edition, wherein the indolent moggy appeared on the Sunday Evening, Monday and Tuesday pages. This was the highest number of appearances he made in a single issue of Cheeky Weekly, the next highest being his Monday and Friday outings in the 21 January 1978 comic.


Cheeky’s feline friend appeared in the cinema during the interval in the comic dated 28 January 1978.

Fortunately the moggy was able to soon shake off the malady and by the time of his next appearance in the 22 April 1978 edition, had reverted to his normal scruffy self.

Scruffbag’s longest absence was the 32 weeks between his 09 December 1978 and 21 July 1979 farewell appearance. He contributed feline fun to 10 editions of the toothy funster’s comic.

In the same 05 November 1977 issue of Cheeky Weekly that featured Scruffbag's debut in that title, Granny Gumdrop's cat Tired Tom also made his first appearance. This stripy feline evidently out-snoozed his school-based comrade.


Possibly because the comic couldn't really accommodate more than one fatigued feline, Tom made only one more appearance in the toothy funster's title, that being in the 17 December 1977 issue. Thus he avoided, by a whisker, falling into the one-offs category.


Although he did put in an appearance (of sorts) in Krazy dated 18 March 1978, when Baby Burpo was the subject of the Cheeky's Pal page. 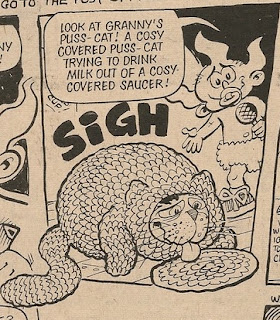