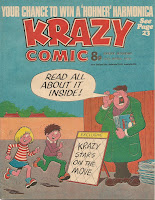 In the same week that Cheeky Weekly number 26 hit the newsagents, readers of Krazy comic, in which the Cheeky character had originated, learned that the current issue was to be the last, and as from next week Krazy would merge into one of IPC's long-running titles, Whizzer and Chips.  Merges were the customary fate of comics whose sales figures had fallen below viable levels.  By merging the most popular strips from the failed title with an existing, more successful comic, the publishers hoped to deliver a circulation boost to the established title, in the form of the erstwhile readers of the defunct comic.

Krazy, which launched on 16 October 1976, almost exactly a year before Cheeky Weekly appeared, was a bold attempt to try something new; a melding of the traditional British humour comic with a less rigid, Mad Magazine-influenced style.  In Krazy, one-off humorous features appeared alongside the standard weekly strips, so that readers were never entirely sure what each issue would contain.  Some found this approach refreshing, but maybe it was too unsettling for those who preferred a comic consisting of the same strips every week. 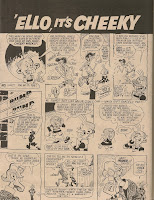 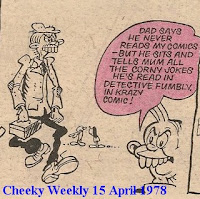 Launching spin-off title Cheeky Weekly may in fact have hastened Krazy's demise.  Not all comic readers had access to unlimited budgets, and a significant number of those who had up until then read Krazy may have opted to drop Cheeky's progenitor title in order to fund their purchase of Cheeky Weekly.

Ironically, Cheeky made a reference to Krazy comic on the Tuesday page of Cheeky Weekly issue 26, which shared the same cover date as the final Krazy.  Krazy's precarious state would have been obvious to readers of Cheeky Weekly, as in the issues dated 14 January 1978 and 25 March 1978 the slogan 'Save a comic - buy Krazy' had been seen in the Cheeky's Week strips.  Presumably the decision to bring Krazy to an end had already been made by that stage.  The demise of  their comic would not have been a surprise to Krazy readers, either, as the cover of Krazy's 11 March 1978 issue, had read 'Save this comic, buy it'.

Cheeky had featured in 2 regular strips in Krazy; his own 'Ello, It's Cheeky feature, and The Krazy Gang where he appeared as a member of the titular group.  The Krazy Gang (with Cheeky) survived the merge and continued to appear in Whizzer and Chips.  'Ello, It's Cheeky did not continue after the merge, except in the sense that its format continued in the Cheeky's Week strips in Cheeky Weekly.  An intermittent Krazy series that began under the title Cheeky's Pal eventually evolved into The Burpo Special, a feature that was resurrected in the pages of Cheeky Weekly some 8 months after Krazy's cancellation.

In Krazy's final 'Ello, It's Cheeky strip, the toothy funster introduced his pals from Cheeky Weekly and invited readers to join him in his own comic, thereby risking a split in readership as some decided to move to Cheeky Weekly, while others opted to follow their Krazy pals into Whizzer and Chips. 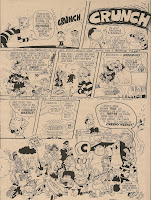