Cheeky Weekly was a little different to the traditional British humour/adventure comic because it was largely based around a single character, Cheeky, who we followed through a week of adventures each issue. There were other strips in the comic, but it's mainly remembered for Frank McDiarmid's freewheeling depiction of Cheeky and his pals, with plenty of comic asides, notes to the readers (including references to himself as the artist), and inventive page construction with panels leaning at giddy angles.

Maybe it was never intended that Frank would be the sole provider of art on the Cheeky pages. In fact, given the high number of pages featuring Cheeky each issue, it would seem unreasonable for the editors to expect one artist to generate all the Cheeky content every week. However, the general opinion seems to be that Cheeky was Frank's baby, and Frank was the only artist to sign the Cheeky features. For me, Frank certainly is the definitive artist for the nutty world of Cheeky and his friends.

Cheeky first appeared in another IPC comic, Krazy, where, on page 3 of the launch issue of that title dated 16 October 1976, Cheeky was drawn by Ian Knox. Gangs of various descriptions were a recurring theme in British comics, and Cheeky was depicted on this page as a member of Krazy's own gang, The Krazy Gang. The human members of said group of characters all bore a 'K' on their various upper garments.

However, on page 20 of the same issue, Cheeky appeared in his own strip, 'Ello, It's Cheeky (later retitled 'Ello, I'm Cheeky), drawn by Frank McDiarmid. The style of that strip was slightly more restrained than it would later appear, but the basic elements of Frank's Cheeky had already been established.

This is that first appearance of Frank's Cheeky... 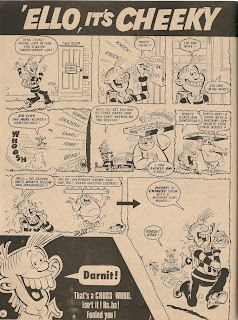 ...note how the toothy funster bears the K jumper even on his own pages.

We must assume that over the weeks, the feedback from Krazy readers was such that the publishers felt Cheeky could support his own comic.  The first hint that Cheeky was emerging as a star in his own right came when the K was dropped from the front of his jersey and replaced with a C in his own strip as from Krazy dated 20 August 1977 (and in The Krazy Gang from the following week).  This may also indicate that plans for his own title were afoot from this point.
Posted by Niblet at 14:48