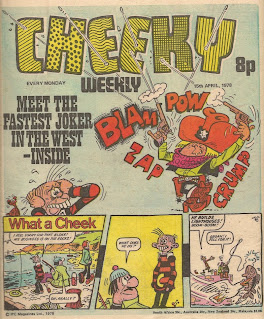 Cheeky and Snail are looking understandably nervous on the cover this week, as Krazy Town cowboy Six-Gun Sam seems to have obtained real guns and live ammo, and is shootin' the whole place up.  This is a nice piece of art by Frank McDiarmid, but I take issue with the 'Crump' sound effect, which I associate with heavy artillery rather than a pair of Colt 45s.  I'm not too sure about 'Zap' in this context either.

This is the second consecutive issue to make a feature of the comic title (see the title cosy on last week's cover).


There is no above-title caption on the cover this issue, and Cheeky appears to be at Krazy Town harbour in this week's What A Cheek (does Krazy Town have a harbour?).


Supporter of good causes Do-Good Dora is on Cheeky's trail with her collecting tin all week.  Cheeky determinedly dodges her each time. 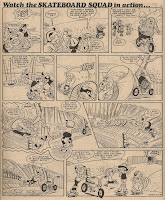 I like the skewed art, thumbprints and Frank's notes about the 'nutty artist' on the Suddenly page. 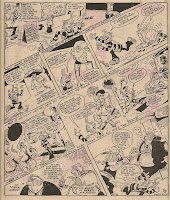 On Saturday, prominence is given to Walter Wurx's 'looward lunge'. 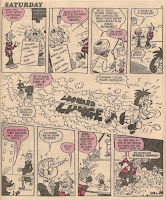 Soppy Louise is the subject of this week's Pin-Up Pal poster on the back cover.  She's depicted carving 'Louise luvs Cheeky' high on a tree trunk, while Cheeky hacks desperately at the base with an axe.