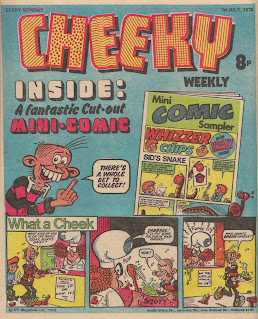 The mini comic promotion gets under way this week, and is the subject of the main cover pic.  A Cheeky Weekly mini comic is appearing in this week's issue of Mickey Mouse. Underneath, Cheeky has a school canteen encounter with Auntie Daisy.

Skateboard Squad are at a cycle championship this week and yes, it's that comic cliche again - the trophy gets stolen.  Fortunately, the Squad nab the felon who filched the silverware.

In a storyline continued from the previous issue, on Sunday evening Cheeky meets Petula and Sherlock who are still on the trail of a missing elephant.  The pachyderm-pursuing pair resurface throughout Cheeky's Week.

Also appearing several times on the toothy funster's pages is Chancellor of the Exchequer, Denis Healy, a very distinctive character with bushy eyebrows.  On the Thursday page is a limerick which uses Healey's supposed catch-phrase "Silly Billy", which I think is attributable to 70s impressionist Mike Yarwood rather than Denis himself. 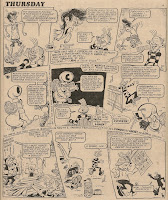 Nigel Edwards does the art honours on this week's 6 Million Dollar Gran episode in which the synthetic senior citizen gets a job as a tea lady at a factory, with predictably chaotic results.

On Monday Cheeky enjoys a sneaky read of the Whizzer and Chips mini comic while in class.  This raises the question - as Cheeky had read this issue of Cheeky Weekly, why didn't he avoid Burpo's front-garden trap on Wednesday, since he would have known about it in advance?

This week's Creepy Sleepy Tale is printed in light blue ink.  This is because one of the full colour feature pages is allocated to printing the front/back cover of the mini comic.  This leaves a single colour feature page available, so rather than printing one Creepy Sleepy Tale page in full colour, Calculator Kid gets to debut in many-hued glory, while CST is reduced to blue and white.

James Bold makes the leap from novel to silver screen as the first part of a new adventure, Island of Fear (which will be the final Cheeky Weekly tale of the sleuth of the supernatural) commences at the Saturday morning picture show.

There is no Pin-Up Pal poster for the second week running, its absence due on this occasion to the presence of the mini comic, which results in the conclusion to Saturday, including the denouement of the missing elephant saga, being located on the back cover.  I wonder if this evasive elephant storyline led to the creation of the Elephant On The Run strip which will begin in Cheeky Weekly dated 30 September 1978.

As mentioned earlier, the Calculator Kid feature makes its debut this week, although Charlie Counter has yet to appear on a Cheeky's Week page.