The fifth (and final as far as Cheeky Weekly is concerned) James Bold adventure saw Bold make the switch from novel to big screen.  Evidently, in Cheeky's universe the Bold series of books had been successful enough to spawn a film version, although only as a kids' Saturday-morning-pictures serial rather than a full-blown cinema release.  The actors who play Bold and Angel on screen (unlike in the Home Movie strips, we never get to know the names of the cast) look remarkably like the heroes we saw in the earlier Bold tales, which were presumably depicted via Cheeky's mind's-eye.

Whether Island of Fear is based on an existing Bold novel, which Cheeky has possibly not read, or maybe one he read before Cheeky Weekly began documenting his reading habits, we have no way of knowing.  What we do know is that Cheeky watched the episodes of Island of Fear during the Saturday morning picture show in the Cheeky Weekly issues from 01 July 1978 to 05 August 1978.

The film series opens with Bold and Angel navigating stormy seas, apparently intent on some fishing… 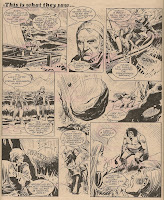 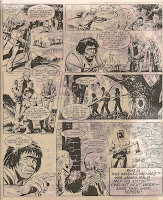 As Bold approaches, the spectral axeman turns and passes through the stone wall into the castle.  Caleb shows Bold the castle gates, on which appear a message in glowing letters, "Defy not ye curse of Craven Castle!"  Bold tries the gates but finds them immovable.

Caleb tells Bold that such spooky happenings started soon after "the great hole" appeared.  Taking our heroes to the site of the chasm, Caleb further explains that the hole, which Bold estimates to be 30 feet wide, appeared one night after a light had come from the sky.  Intrepid Bold edges out on the limb of a tree precariously near the edge, but finds he can't see anything in the gloom at the bottom of the pit.

Returning to the castle, Bold loops his rope around a gargoyle atop the wall and climbs, then pulls Angel up with him.  Caleb is too fearful to join our heroes.

On top of the castle wall a black knight appears, surrounded by a glowing aura, and swings his mace at Bold's head.  The ghost-hunter's lightning-fast reflexes save him and the mace crunches into the stone ramparts.  The knight flees into the castle, just as another fiery message appears in the air before our heroes, warning them that if they proceed they will "hear ye knell of doom - and perish!"

As Bold pursues the knight past the eerie message, he falls into a deep shaft, down which hangs a rope.  Bold twists desperately and grabs the rope, and Angel points to the bell above, from which the rope depends.  As the bell reverberates in response to Bold's weight on the rope, the pair realise Bold is tolling the knell of doom.  Bold climbs back up the rope and soon discovers a stone staircase leading down into the castle.

Using his lighter to pierce the gloom, Bold descends with Angel close behind.  They emerge in a chamber filled with instruments of torture.  As they stare in horror at the fiendish implements, the black knight appears and pulls a lever, rotating the section of floor and wall where Bold and Angel are standing.  Finding themselves trapped in a small room, our heroes are dismayed as water pours in from pipes in the ceiling.  The water rises swiftly and soon Bold and Angel are gasping for breath in the few inches of air that remain at the top of the room.  Just as it seems hopeless, the floor revolves again, releasing the water, and our heroes are surprised to find that Caleb has pulled the lever controlling the floor mechanism.

Caleb explains that he eventually plucked up the courage to follow Bold and Angel, then saw the black night use the lever to imprison the pair.  As Bold thanks the grotesque figure for saving their lives, Angel spots a medieval court jester running down a corridor.  All three set off in pursuit and chase the jester through a door that leads out of the castle.  In the daylight, there is no sign of the jester, and the door through which they emerged closes firmly behind them.  Bold sees that the rope which he left tied around the gargoyle has gone.

Caleb invites Bold and Angel to spend the night at his cabin in the woods, and as the three gather round a fire they spy a hooded monk, surrounded by an eerie glow, walking towards the marsh.  Caleb warns bold that if the monk continues he will be swallowed by the bottomless morass.  To the amazement of the onlookers, the monk walks across the swamp and towards the castle.  Bold vows to return to the castle in the morning to solve the mystery.

Next day, Caleb shows his guests a cave that runs beneath Craven Castle.  As they progress deeper into the subterranean tunnel, a section of floor opens and the three are pitched down a slope.  Sliding to the bottom, the explorers find themselves in a gigantic cavern, in the centre of which stands a colossal stone pillar with a staircase cut into it.  Mounting the steps which spiral up the outside of the column, our heroes make the perilous ascent, only to find that the column reaches the stone roof of the cavern, with no apparent means of escape.

Read on if you dare… 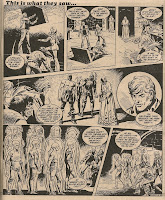 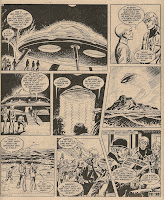 This tale brings a twist to the usual 'felonious faking of ghostly goings-on' storyline, using aliens instead of criminals as the source of the apparitions.  And wasn't it lucky that Bold entered the castle just as the aliens completed the repairs to their interstellar transport, giving them time to explain all before they turned the ignition key and fired up the anti-gravity generators to take them home.

We have seen that the first James Bold tale, Fangs of Fear was  based on a rehashed Maxwell Hawke script from Buster. Although a knell of doom was mentioned in Island of Fear, I've seen an episode of Maxwell Hawke and the Knell of Doom and it bears no similarity to this James Bold tale.  It seems that the basic premise of the final Bold adventure was based on Maxwell Hawke and The Isle of Ghosts, which ran in Buster from 07 March 1964 to 09 May 1964 (thanks to alanultron5 from the Comics UK forum for the info re Isle of Ghosts).

I'm assuming again that the art on this Bold tale is by Mike White.

Thus ends James Bold's run in Cheeky Weekly.  Cheeky's visits to the cinema continued to be depicted in the pages of his comic until the toothy funster's final excursion to the flicks was shown in the issue dated 02 December 1978, but no further Bold serials appeared.  The steel-nerved ghost hunter did return in the Cheeky annuals dated 1979, 1980, 1981 and 1982.  Evidently it was felt that Bold's creepy adventures suited the gloom of winter rather than sunny days on the beach, as our investigator of the supernatural didn't appear in any of the Cheeky summer/holiday specials.

A summary of all the James Bold tales can be seen here.