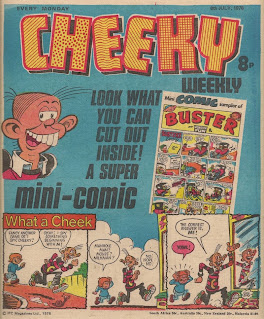 We're now into the second week of the mini comics promotion (a Cheeky Weekly mini comic is appearing in this week's Whoopee!), and the cover leads with the news of a Buster replica inside, emphasised by yet another appearance of the 'standard Cheeky face'.  Barrie Appleby does the honours on the What a Cheek strip featuring Cheeky, Snail and anonymous stooge.

This week's storyline running throughout Cheeky's Week sees Cheeky trying to avoid Teacher, as toothy funster owes podgy pedagogue 500 lines.  There is also a running joke featuring Magnus Pyke, imparting facts about the life cycle of the haggis.  Pyke was at the time a presenter on the TV show Don't Ask Me, where he would answer viewers' questions on science topics, playing up to the image of the dotty professor and gesticulating wildly.  His eccentric manner made him a popular TV personality. 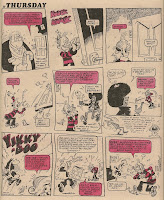 6 Million Dollar Gran's story is reduced to 2 pages, and contains a rare instance of Gran acknowledging that she is not human, as she comments "I've not been oiled this week".

Cheeky has a crafty read of the Buster mini comic in class on Monday.

Returning to the comic for the first time since 14 January 1978, Doodle Doug shows Cheeky his new comic strip, Paddywack.

On page 15 there's exciting news for Cheeky fans - the first Cheeky Summer Special is out now.

Unlike last week when it was blue and white, Creepy Sleepy Tale is in black and white this issue.  The story tells how Medusa turns Johnny Rotten, The Rolling Stones and The Bee Gees to stone.  Some would say not before time, and I'd certainly agree with regard to one of the groups involved.

Like Gran, Mustapha Million suffers a reduction in page count due to the presence of the mini comic, and has a single-page adventure with art by Joe McCaffrey.

3 characters make their Cheeky's Week debuts this issue; Charlie Counter (aka Calculator Kid), Disco Kid and Farmer Giles.  The Calculator Kid feature had of course made its first appearance last week, but Charlie makes the first of his crossovers into Cheeky's Week in this week's comic.

Last week's issue featured an almost all-pure-Frank-McDiarmid Cheeky's Week, but in this issue the cover portrait of Cheeky is the only pure Frank art.  Frank McDiarmid pencils deliver 10 Cheeky's Week elements, with Barrie Appleby giving us his What a Cheek and Wednesday conclusion.