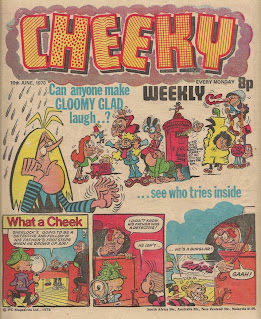 Gloomy Glad dominates this week's cover, and there's a nice touch as her cloud envelops the comic title.  Despite the attempts by an assortment of Krazy Town's finest herberts to amuse her, rendered nicely by Frank McDiarmid, Glad remains resolutely downbeat.

Sherlock makes his only What a Cheek appearance to set up a joke that brings on an attack of Cheeky Weekly Inconsistent Hair Colour Syndrome in Teacher.

Cheeky gets the fun rolling on the Sunday page by telling us that this is Cheer Up Gloomy Glad Week, and he'll make the first attempt to lift his miserable mate's spirits.  We're not surprised to find that she remains woeful, and during the week further attempts at getting Glad to crack a smile are made by Six-Gun Sam, Sid the Street-Sweeper, Baker's Boy, Louise, Granny Gumdrop and, surprisingly deigning to consort with the hoi polloi, Posh Claude.

Skateboard Squad are helping out at their Uncle Ben's farm, and 6 Million Dollar Gran wins a cricket match by going into bat and hitting the ball into the ground, so deep that the opposing team can't retrieve it.

In the background of a panel on the Monday page, high above Krazy Town Bubblegum Boy collides with a UFO.

On Thursday Jim Watson takes over the Cheeky's Week art duties from Barrie Appleby who has provided the art so far this issue (with the exception of the cover's What a Cheek strip, which is by Frank McDiarmid).

The Home Movie strip bows out of Cheeky Weekly this issue (despite the banner at the bottom of the page promising another movie next week), and the final offering, in lurid pink ink (or is it a pink and white film?), is Robinson Crusoe. 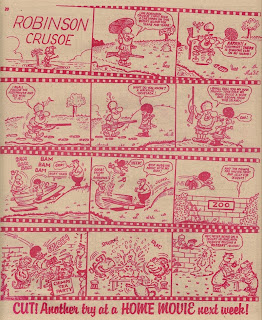 On page 21 is something of a rarity - a Joke-Box Jury, including the toothy funster himself, deliberating on a selection of jokes with no inappropriate content (from our perspective). 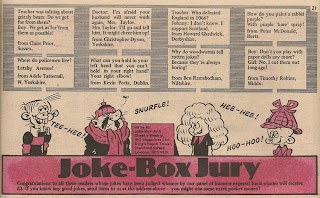 Do-Good Dora is the subject of the Pin-Up Pal poster on the back page.

Barrie Appleby provides 7 Cheeky's Week elements, Jim Watson delivers 5, and Frank McDiarmid's contribution to Cheeky's Week is What a Cheek only, but he also does the honours on the main cover pic and the Pin-Up Pal poster.