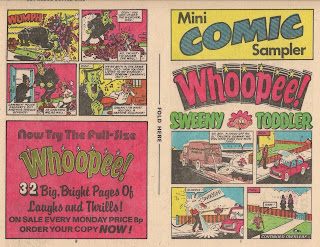 The back/front cover features the conclusion of Frankie Stein's story, and the first part of a Sweeny Toddler tale.  I don't know who did the art on the Frankie strip, but it's certainly not by Robert Nixon, who was the regular artist on the feature in Whoopee! at the time this mini comic was published.  Sweeny is drawn by Paul Ailey who is deputising for Tom Paterson who was the regular Sweeny artist in Whoopee! at the time.  Sweeny returned to Cheeky Weekly on a Star Guest page in the 14 April 1979 issue. 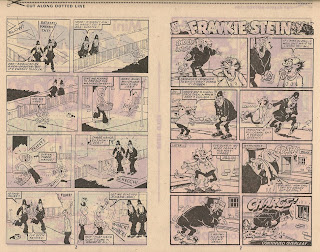 Next up is the final part of Sweeny's strip, together with the first Frankie page.  The title banner seems to feature a vintage Ken Reid rendition of Frankie. 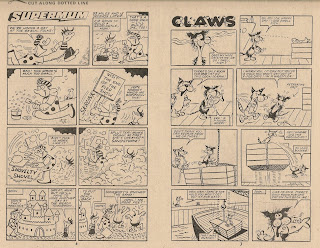 Supermum is ghosted by Jack Clayton (Cheeky Weekly's Home Movie and Paddywack artist), standing in for Dicky Howett, who usually did the art on this strip in Whoopee!  Supermum made a Star Guest appearance in Cheeky Weekly dated 30 June 1979.  Alongside Supermum is a Claws strip drawn by Artie Jackson, deputising for usual artist Styx (Leslie Harding).  Artie ghosted on Paws, another Styx strip, in the Whizzer and Chips mini comic in the 01 July 1978 issue of Cheeky Weekly. 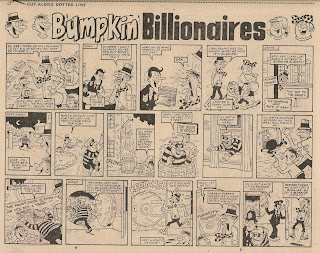 Ed McHenry stands in for Jimmy Hansen on the Bumpkin Billionaires strip.