Gloomy Glad first appeared in the 'Ello, It's Cheeky strip in Krazy's 25 December 1976 issue, but her parents made their debut in Krazy dated 18 June 1977, some 4 months before the launch of Cheeky Weekly.  You can see the Cheeky's Pal page on which they premiered over at Bruce's blog.  In the final panel of this strip, Glad's parents seem to be succumbing to the air of despondency surrounding their offspring.

The next time Glad's parents appeared was in the 'Ello, It's Cheeky strip in Krazy dated 03 December 1977.  Evidently the descent into melancholy had continued since their debut and they now appeared to be as mired in gloom as their despondent daughter.  The stress had caused Glad's dad to lose his hair and grow a moustache.  On the plus side, he no longer needed glasses. 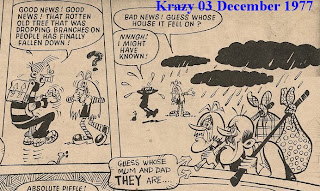 We next saw Glad's dad in Cheeky Weekly of 27 May 1978.  Although he looked at bit perplexed at his motor mechanic mix-up, his mood seemed to have improved considerably, and his moustache had gone. 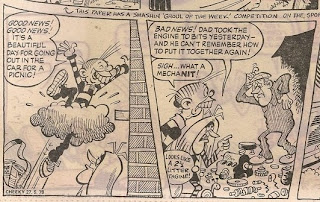 However, by the time of their final Cheeky Weekly appearance in the issue dated 12 August 1978, Glad's Ma and Pa are once again in the depths of despair.  You'd think that Glad's dad would be delighted with the thick head of hair he is now sprouting (but he's probably depressed by the realisation that, in transferring from Krazy, he has become subject to the Cheeky Weekly Inconsistent Hair Colour Syndrome). 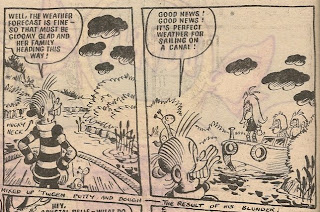