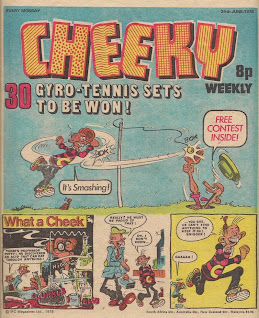 Another competition is announced on this week's cover, this time 30 Gyro-Tennis sets are to be won.  Cheeky and Manhole Man are on hand to demonstrate.  Below, Cheeky's What a Cheek joke causes his dad to trample his lunchbox.

Snoozin' Susan is the featured character this issue, as she sleeps her way through Cheeky's Week.

On pages 9 and 10, James Bold solves the riddle of The Frightened Village in the ninth and final instalment of his latest adventure.

On Tuesday, a perplexed Cheeky is aghast to learn that Petula and Sherlock are searching for a missing pet - an elephant. This storyline will continue across Cheeky's Week in the next issue. 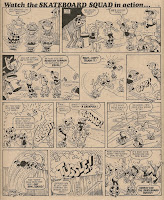 On page 18, below an ad for this year's Whizzer and Chips Holiday Special, out Thursday 15 June, is the announcement of a mini comics promotion across 4 IPC comics. 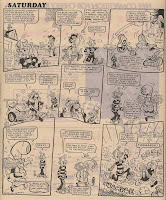 The Gyro-Tennis competition on page 25 has the same format as last week's skateboard competition; spot the difference in 2 cartoons (basically the same pic as on this week's cover but with a few extra characters in the background) and supply a funny caption for it.

On the Saturday page, Snail insults us readers.  Now what did we do to deserve that?

Rounding off this particularly ad-packed issue is a colour Kellogg's ad.  The cereal manufacturers are running a promotion allowing consumers of their products to send off tokens and receive Playpeople models.  This back cover ad bumps the Pin-Up Pal poster from the comic.

This issue sees the final appearance of the Suddenly feature, and the Space Family Robinson escape from the planet on which they were marooned, to return to Earth in the final episode of their adventures. entitled 'Homeward Bound'.

Making its Cheeky Weekly debut is Who's Afraid of the Big Bad Wolf (reprinted from Cor!!), appearing in the supporting feature slot, and on page 31 is news of a new feature starting next week - Calculator Kid.

Two of Cheeky's pals depart this week.  Well, the first one is not really a pal - it's the newsagent who, as all his appearances were related to the Suddenly page which finishes this week, will not be seen again.  The other Krazy Town resident making his final appearance this issue is the Telephone Pole Man.

Barrie Appleby draws 6 Cheeky's Week elements in this issue, with Frank McDiarmid pencils supplying 5, and Frank McDiarmid giving us the What a Cheek strip and the Wednesday conclusion, although he also supplies the art for the main cover pic.