A spoof on the popular TV show of the period, The Six Million Dollar Man, 6 Million Dollar Gran appeared in all but 3 issues of Cheeky Weekly.  In the first episode, robotics expert Professor Potts unveiled his new creation, an android 'so lifelike that it has cost six million dollars to make'.  Immediately after presenting the robot to his colleagues at the World Authority for Scientific Projects (WASP), an attempt was made to steal this technological wonder, but the robot overcame its would-be abductors.

Fearing his synthetic humanoid may fall into enemy hands, Potts made the questionable decision to take the robot home to his family.  However, in a cunning ruse to disguise its true nature, the 'metal masterpiece' was dressed as an elderly woman, and Potts' children, Pete (referred to as Billy in the first episode) and Pauline (whose hairstyle was different in subsequent adventures), adopted the robot as their granny. 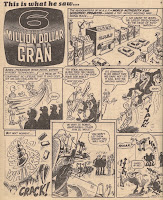 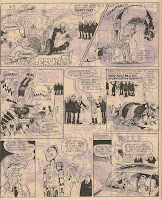 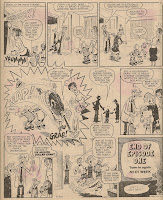 Any readers keen to find out more about the mysterious WASP organisation were to be disappointed, as that aspect of the story was never mentioned again (although the Prof was seen working in a laboratory in the 22 September 1979 issue).  Instead, most of the scripts just played with the idea of a deceptively powerful old lady who often foiled felons or carried out rescues.  Early episodes were introduced by a caption explaining that Gran is a robot, but after the 6th instalment such captions appeared only sporadically, sometimes just describing our heroine as a 'super-gran'.  The captions ceased entirely after the 31 December 1977 issue.  New readers were left to work out for themselves what was going on as Gran's true nature was rarely mentioned from then on, and in some of the strips even Gran seems to forget she is not human.

For the majority of the issues of Cheeky Weekly, the page preceding the 6 Million Dollar Gran feature would show Cheeky rushing home to watch Gran's latest adventure on TV.  Gran appeared most regularly following the Sunday page (39 times), with 37 appearances after the Sunday evening page (the Sunday evening feature came to an end in the issue dated 23 September 1978 - in the following issue Cheeky told us that Gran's programme had been moved to a mid-day slot), and 10 after Monday.  Near the end of the comic's run, as the feature continued its trajectory towards the rear pages of the comic, Gran wouldn't follow directly from a Cheeky's Week page. 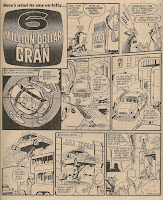 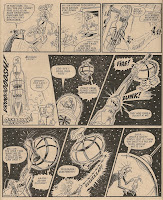 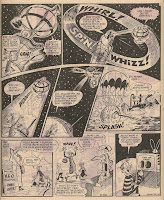 Until Cheeky Weekly dated 06 May 1978, the final panel of each 6 Million Dollar Gran story showed Cheeky looking at a caption on his TV which read  'End of Episode XX. Tune in again next week', but in the following stories the episode number was omitted and sometimes the caption would just read 'The End'.  The final time that Cheeky was shown to be heading home to watch Gran was in the 30 June 1979 comic.  As mentioned above, in subsequent issues, the Gran page wouldn't follow directly from a Cheeky's Week page, most regularly following Calculator Kid.  From the issue dated 21 July 1979 the final-panel-showing-Cheeky-watching-TV idea was abandoned, and the strip would fill the whole of the final page of each episode.  The final reference to Gran being a TV show, the title panel which showed a TV screen, was revamped on 15 December 1979.  In this issue the original title was replaced by a simple, unadorned caption and the new style of title panel continued (albeit with the traditional snow-covered variant in the 29 December 1979 issue) for the remaining 7 issues until Cheeky Weekly's demise.

In the 19 January 1980 edition, Gran's usual strip was replaced with a spot the difference puzzle based on a panel lifted from her story in the issue dated 17 March 1979.

Mustapha Million is seen watching an episode of 6 Million Dollar Gran on TV in the first panel of his strip in the comic dated 29 April 1978.

I suspect that the Gran strip which was prepared for the 1978 Christmas issue of Cheeky Weekly (one of the issues that failed to appear due to industrial action) was eventually published in the 1980 Cheeky Annual on pages 9-11.  In the annual, It seems to me that the wording of Gran’s first speech balloon has been changed to refer to a new year party, but Gran brings a giant Christmas cracker. Also, a Jim Petrie rendition of Cheeky has been substituted in the final panel, where in Cheeky Weekly we would see Cheeky looking at a ‘The End’ caption on the TV.

6 Million Dollar Gran was the only feature in Cheeky Weekly to regularly run to 3 page stories, although not all the episodes were that lengthy.  84 episodes were 3-pagers, 27 were 2-pagers, and 3 stories completed on a single page.

Gran's adventures in Cheeky Weekly were drawn by Ian Knox (94 episodes), Nigel Edwards (18 episodes) and Mike Lacey (2 episodes).  In the Mustapha Million strip in the comic dated 29 April 1978 (as mentioned above), Reg Parlett draws Gran on TV in the first panel.


Despite it being made clear in the first episode and subsequent introductory captions that Gran was a robot, on several occasions in the comic the aged automaton's fantastic abilities were referred to as bionic (examples here, here and here). This was clearly an attempt to attract fans of the popular TV show that the strip spoofed, which was often referred to by the public as The Bionic Man. Why, then, didn't the scriptwriter just make Gran bionic in the first place? One online dictionary defines 'bionic' thusly;


Having anatomical structures or physiological processes that are replaced or enhanced by electronic or mechanical components.


TV's 6 Million Dollar Man gained his electromechanical upgrades as a result of injuries suffered in a terrible accident. Having a sweet old granny lose some limbs or vital organs or otherwise undergo ground-breaking surgery was clearly not really an option for a humour strip aimed at children, so Gran was envisaged as entirely synthetic.

Gran survived the merge at the end of Cheeky Weekly's run, transferring into Whoopee in February 1980, and the character featured regularly until Whoopee itself was subsumed into Whizzer and Chips in April 1985, although as from Whoopee! and Cheeky dated 09 May 1981 the strip was retitled Robot Granny.  Following Whoopee's absorption of Wow in July 1983, the title of the strip was again changed, this time to Gran's Gang.  See here for more info and examples of Gran's post-Cheeky Weekly incarnations.

In the special skateboard issue of Cheeky Weekly dated 04 February 1978, someone resembling Gran appears in the Skateboard Squad strip as one of the spectators watching the Squad give a display of their boarding skills.  This cannot actually be Gran, since in Cheeky's universe (in which the Squad also exist), Gran is a fictional character from a TV show.  We must therefore assume that a member of the crowd is wearing a Gran mask, possibly as a publicity gimmick by the TV company, or maybe the wearer of the mask is a Gran fan. A little harder to explain is the 6 Million Dollar Gran story in Cheeky Weekly dated 06 October 1979, in which the Potts kids invite the synthetic senior citizen to their party. At the end of the strip, Pete and Pauline are delighted to welcome "Our chums from Cheeky Weekly" (including Cheeky, Baker's Boy and Mustapha Million among others) to join the festivities. Although, as mentioned above, Cheeky had not been shown heading home to watch Gran on TV since the 30 June 1979 issue, and the feature had not ended with the toothy funster watching a 'The End' caption on TV since 14 July 1979, so maybe we're supposed to infer that the nature of Gran's relationship with the Cheeky universe had changed by this stage.

Gran also appeared on page 31 of the final issue of Cheeky Weekly dated 02 February 1980, as those characters who would survive the merge with Whoopee! met their new comic chums.  I think we can allow a little license in this instance, since Gran had not been depicted as a TV programme in Cheeky Weekly since July the previous year, and anyway the editor had little option than to include Gran alongside the other characters who would transfer into Whoopee!  However, having said that, Paddywack, whose ambiguous position in Cheeky's universe mirrors Gran's, (being a fictitious character who made one appearance in Cheeky's world) also survived the merge yet did not appear in that meeting between refugees from Cheeky Weekly and their Whoopee! Pals.  Cheeky Weekly remained inconsistent to the end. 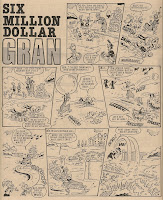 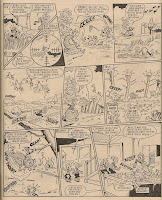