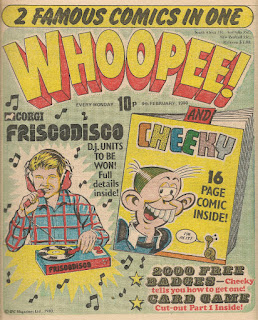 We learn from the cover of the first Whoopee! and Cheeky that our toothy pal and his ex-Cheeky Weekly co-survivors will be ensconced in a 16 page comic-within-comic in the centre of the host title, a rather unusual way of absorbing one comic into another (the customary fate of an underperforming title was its 'merge' into a more successful comic). Most 'merges' resulted in the features from the failed comic being interspersed among the pages of the host title. Cheeky Weekly wasn't so much merged into Whoopee!, rather the toothy funster's title was embraced by the elder comic.

Whizzer and Chips had most famously employed the two-comics-in-one format since 1969, but the idea had also been used in Shiver and Shake, and of course Cheeky Weekly itself adopted the concept during the period in which the Mystery Comic occupied its centre pages (although adding an additional metatextual spin not present in the above examples by having the Mystery Comic being a title read by the Cheeky Weekly characters).

Since the focus of this blog is on Cheeky and his pals, I'll home straight in on that very first Cheeky section. On the section's front page, our toothy pal is, unusually, sporting a blue and black jumper instead of his familiar red and black apparel (the new sweater was probably given to him by the Whoopee! editor as a bit of a sweetener). This is another use of an image that I refer to as the 'standard Cheeky face' which was first seen in the debut issue of Cheeky Weekly and on several subsequent occasions. The office cleaner has clearly been complaining about having to dust the boxes of  Friend of Cheeky badges left in the corner of what was the Cheeky Weekly office. Snail makes his presence felt, as he did on the Whoopee! cover. 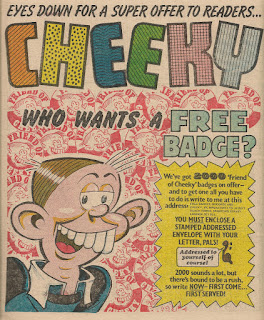 The Curtain rises on Stage School with a brief résumé of the strip's premise for the benefit of Whoopee! readers, before the cravat-wearing showbiz teacher (who was rarely seen in Cheeky Weekly) sets a tough exam assignment. The title panel that appeared in the last few months of the strip's Cheeky Weekly run has been retained.

Stage School's 2-pager is followed by a page carrying the details of the proper-front-page-announced competition to win a Friscodisco battery-powered record player.

Erstwhile Cheeky Weekly readers may be a bit surprised to see a selection of Paddywack gags over the page, as the bumbling buffoon wasn't included among the band of characters shown to be transferring to their new home in last week's final issue of our grinning pal's comic. Readers are still being invited to submit their Paddywack gags (the editor clearly hoping to mine a previously-untapped source of gags in the shape of Whoopee! readers who, because the dithering dolt wasn't included in the Cheeky mini comic that appeared in their funny paper, were hitherto unaware that such a thing as a 'Paddywack type joke' even existed), although the cash reward for successful contributors has been reduced from Cheeky Weekly's £2 to a single quid BUT with a bonus Whoopee! Cushion prize which I'm sure is worth a pound of anyone's money.

Next up is 6 Million Dollar Gran, or rather $6000,000 Gran as she has now been styled. Pauline Potts informs Whoopee! readers that the titular OAP is a 'bionic robot granny'. Well, at least this oxymoronic statement  does acknowledge Gran's robotic origin.


The next 2 pages of Cheeky's section are devoted to the first instalment of the cut-out Fib card game, IPC, as ever, never missing an opportunity to encourage readers to attack their comics with scissors. The cards feature characters from the newly-combined comic, so Cheeky, Mustapha Million, Snail, Gran and Calculator Kid rub shoulders with the likes of Whoopee! stalwarts Frankie Stein and Lolly Pop. Readers excising the game from within the Cheeky section would be losing the second of Gran's pages and the first of Cheeky's. 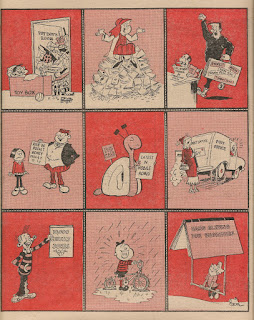 Cheeky, seemingly unaware that he risks being glued to a cornflake packet then sliced into pieces, does the introductions in his whopping 4-page segment, titled It's Cheeky!. Well, obviously 4 pages is a bit of a comedown compared to the coverage he had in Cheeky Weekly, but it's a good number of pages to be allocated post-merge (the opinions of long-time Whoopee! readers who find their favourite strips jettisoned to make way for what they may well consider to be 'all this Cheeky rubbish' would no doubt differ). The monochrome printing means we can't tell whether the toothy funster is wearing his new blue/black jumper. Mike Lacey does his usual superb job, but it's a pity Frank McDiarmid wasn't on hand to furnish the inaugural artwork for Cheeky's Whoopee! era. I suspect Frank either took a well-deserved break for a week, or was busy building up a stock of Cheeky strips for future use. 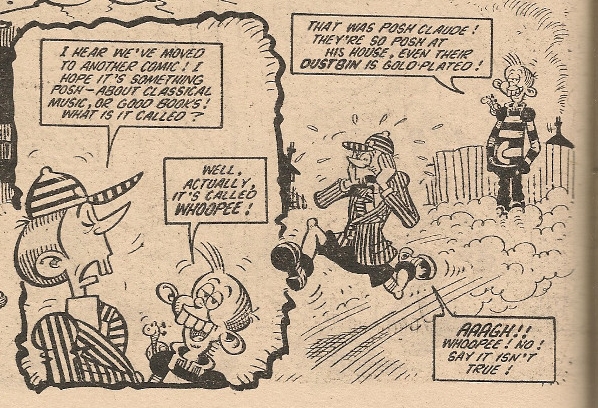 Like Gran, Mustapha has undergone a title revision which now reads Mu$tapha Mi££i(coin image)n - he was previously titled Mustapha Mi££ion although I rarely referred to him as such. Joe McCaffrey clearly used Reg Parlett's artwork on the first Mustapha episode as a reference for the 3-panel back-story. 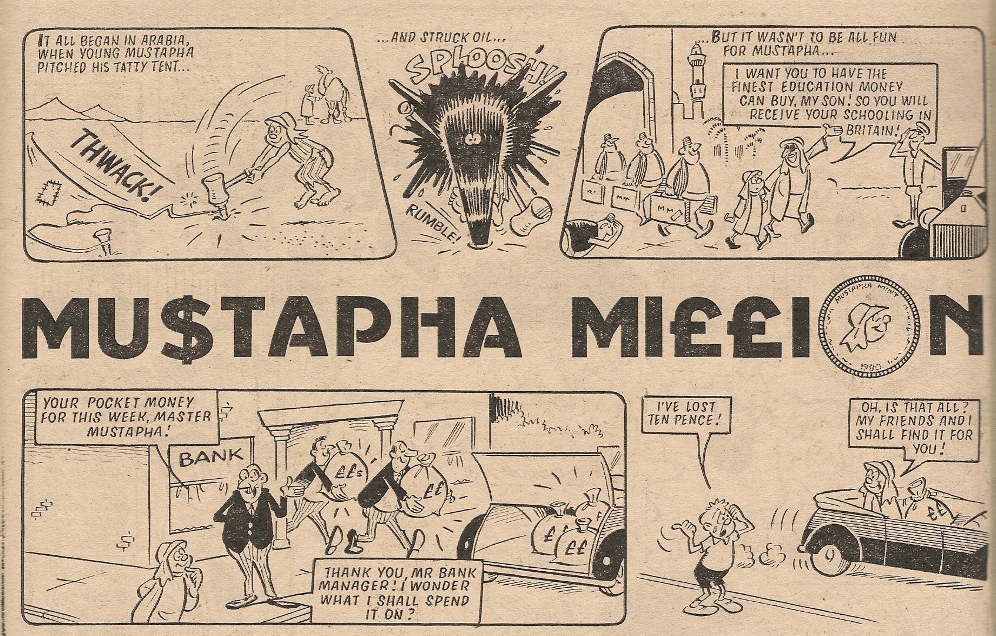 Rounding off the Cheeky section is Calculator Kid. It's remarkably fortunate for Whoopee! readers that just as the story starts, Charlie and Calc encounter a newcomer to the area (modelling rather alarming, baggy tartan trews), giving young Master Counter and his battery-powered buddy the opportunity to explain the strip's set-up. Whereas in Cheeky Weekly the feature had a title panel located at the left hand side of the first row of pictures, Charlie and Calc now have a banner-style title, although using the same image as before.

Long-time readers of the host title may have already been aware of Cheeky, Gran and Mustapha if they had read the aforementioned Cheeky mini comic that appeared in their 08 July 1978 edition.

Other than the '2 Famous Comics in One' banner on Whoopee!'s front page and the Cheeky/Posh Claude gag, there is no mention of the 'merge' in this week's issue - not even a 'welcome to our new readers'-type message on the letters page (although some of the strips in the Whoopee! section do include introductory explanations for new readers).

There is, however, this ominous announcement...

Email ThisBlogThis!Share to TwitterShare to FacebookShare to Pinterest
Labels: Merge, The Whoopee Years