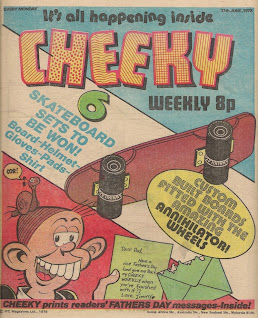 Under the banner 'It's all happening inside', this week's rather uninspiring cover publicises the skateboard competition and the Father's Day messages to be found inside.  The 'Standard Cheeky Face' illustration is employed once again, with snail placed on top for a bit of variation.

It's the turn of Mechanic to feature throughout Cheeky's Week, swapping a succession of car jokes with our toothy hero.  Or at least Mechanics' feet, protruding from beneath a variety of rusting wrecks, appear throughout the week, and Mechanic appears pushing a car on Saturday, but we don't see his face.  Unusually, Cheeky joins his car care companion under the vehicle for Monday's, Suddenly's and Wednesday's jokes.

Skateboard Squad help out at Joe's Café when the waitresses fail to turn up for work.  Later Cheeky uses a clockwork mouse to scare Mum up onto the sideboard, so that he can watch 6 Million Dollar Gran who, in a reduced, 2-page story due to the inclusion of the competition and Father's Day messages, deals with a bully at the swimming pool. 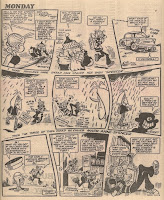 A knight on a motorbike terrorizes the citizenry in this week's Creepy Sleepy Tale.

On Thursday, Oscar invites Cheeky to view his latest Home Movie, as he has done every week that a Home Movie strip has appeared.  Last week's issue contained the final Home Movie strip to appear in Cheeky Weekly, so in what is probably a change to the original text in his speech balloon, Cheeky declines the offer and speeds on to the next page to view the skateboard competition.  One wonders whether a Home Movie page was prepared for this issue, but bumped by the competition and Father's Day messages.  Assuming that IPC wouldn't let any unused strip go to waste, a search through subsequent Cheeky-related titles reveals the answer is no.  Home Movies appeared in the 1978 Cheeky Summer Special and the 1979 Cheeky Annual, but both covered 2-pages, so wouldn't have been originally prepared for Cheeky Weekly, where all the Home Movies were a single page. 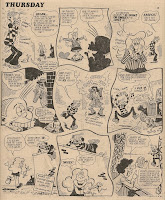 The skateboard competition is a combination spot-the-difference and create-a-funny-caption affair, based on two drawings of the Skateboard Squad.

We are mercifully spared a Warner Brothers cartoon strip, as two Bam, Splat and Blooie reprints from Buster are the supporting features at the cinema on Saturday.  This is the final occasion on which Bamming and Splatting, not to mention Blooieing, will be in evidence in the toothy funster's comic.

We also say goodbye to stalwart Oscar, who seems to have been mortally offended by Cheeky's spurning of his latest movie, and will never be seen again.

Mike Lacey takes on Cheeky's Week almost single-handed, delivering 11 elements.  The Wednesday conclusion is the only art Mike doesn't provide - that's by Barrie Appleby.  There's no What a Cheek on the cover this week, and Frank McDiarmid's only contribution is the Pin-Up Pal poster.  The standard Cheeky Face on the cover is probably by Frank (it's a kind of 'formal' portrait of the toothy funster and maybe it was produced as an artists' reference illustration, as it has been in evidence since the Cheeky Weekly flyer), but I've assigned it as a cut and paste job.