Moving into the second week of summer 1978's mini comic promotion, Cheeky Weekly dated 08 July was host to a miniature replica of IPC's long-running title, Buster, which at the time was sharing its masthead with the latest in a long line of merges, Monster Fun. 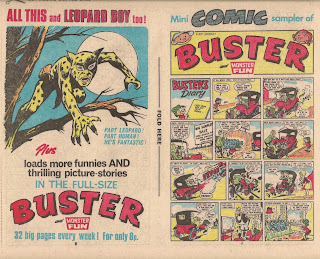 First on the combined front/back cover is an ad for the popular Leopard from Lime Street strip.  Presumably it was felt that a single page mini comic strip wouldn't do the Leopard Boy justice (it was an ongoing serial of 3-page instalments in Buster), so an ad has to suffice.  Art by Mike Western, who did the artwork on the regular strip.  Alongside is a Buster strip which demonstrates that reprinting artwork originally prepared for the full-sized page is not very satisfactory in a mini comic.  Angel Nadal's vintage Buster strip suffers in the reduction, and the text is squintingly compressed.  At the time the mini comic was published, Reg Parlett had taken over art duties on the Buster strip. 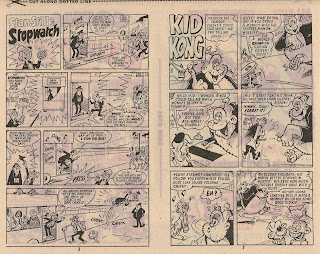 Thankfully, Reg furnishes us with a mini-comic-sized Stan Still's Stopwatch page.  Reg was the regular artist on this strip over at Buster.  On the adjacent page, in a nice touch, Rob Lee, the regular Kid Kong artist, depicts the 'nana-loving ape visiting Cheeky and pals in Krazy Town. 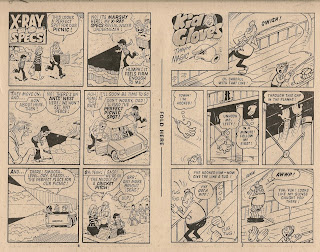 Mike Lacey gives us X-Ray specs, and Rob Lee is back with a page featuring Kid Gloves.  Mike and Rob were the regular artists on these strips. 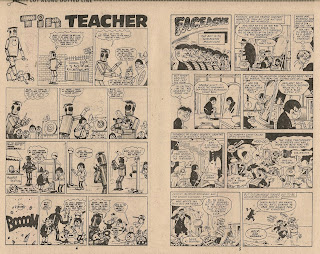 Next we have a couple of reprints, so it's microscopes at the ready to study Tin Teacher and Faceache by Peter Davidson and Ken Reid respectively, both of whom were the regular artists.