Herman the traffic warden was among those of Cheeky's pals who were created for Cheeky Weekly, although he appeared in the 'Ello, It's Cheeky strip in Krazy's final issue.

Herman, who had a fondness for slapping tickets on the Vicar's bicycle, made his debut in Cheeky Weekly's first issue, and bowed out in the comic dated 05 January 1980, clocking up appearances in 39 issues.

The tyrannical traffic warden gave Cheeky a copy of The Mystery Comic in the issue dated 03 December 1977, and in the following week's issue Herman's moustache was mysteriously absent.

On the subject of moustaches, Herman's facial hair arrangement is obviously based on Adolf Hitler's, and to hammer the analogy home, Herman is occasionally seen wearing the iron cross, and once sporting a swastika armband, not something one would expect to see in children's humour strips today. 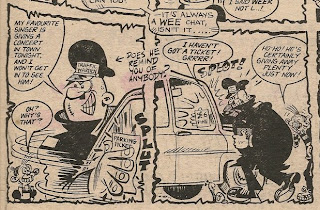 The 06 May 1978 issue was the comic that featured Herman throughout Cheeky's Week (well, with the exception of Tuesday), as the petrifying parking permit patroller attempted to set the world record for the number of parking tickets issued.

Herman left Cheeky another copy of The Mystery Comic, this time under Cheeky's Dad's windscreen wiper, in the issue dated 03 June 1978

Herman threatened to slap tickets on the visiting team's cars during Krazy Town FC's football match in the 09 December 1978 issue, causing the match, in which the home team were losing 8 nil, to be abandoned.  In the 12 May 1979 issue, Hypno-Tessa persuaded Herman to ignore illegally-parked cars. 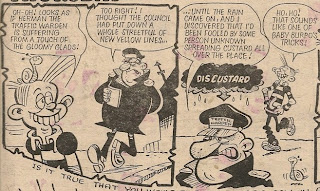 In the comic dated 01 September 1979, Ursula became Herman's assistant, dragging lorries off double yellow lines (after Herman had issued them with tickets, of course).

Herman was the subject of 19 August 1978's Pin-Up Pal poster, in which he was seen gleefully slapping tickets on the carnival trucks and animals, as a circus parade passed through Krazy Town. 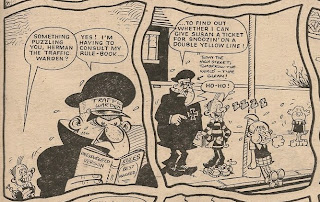 Herman - Number of appearances by Element


Herman - Number of appearances by Page