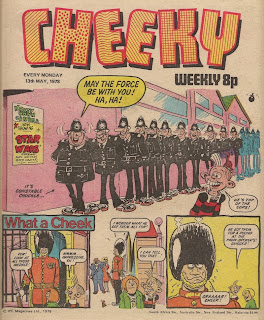 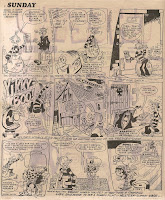 The Star Wars phenomenon hits Krazy Town in the main cover gag this week, and Cheeky (with anonymous inconsistent hair colour syndrome sufferer) is outside Buckingham Palace for some What a Cheek fun at the expense of a Guardsman.

There are a number of crossovers with Cheeky's Week characters in the Skateboard Squad strip, which features Manhole Man, Baker's Boy, Goalie Cat, Constable Chuckle (I think - he's under duress so not his usual amiable self) and Snail.

6 Million Dollar Gran foils criminal capers in a castle in this week's 2-page story.  The shorter story this week appears to be due to extra adverts and a page devoted to listing the winners of the kite competition that featured in the 28 January 1978 issue. 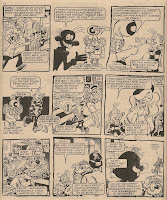 Mustapha Million's story has a moral, showing the consequences of excessive sweet-consumption. 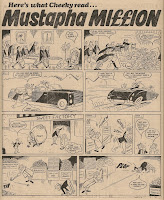 There is no 'Cheeky's pal throughout the week' storyline this issue, but Cheeky meets up with Doctor Braincell on Saturday, to conclude the jokes he started with the merry medic on Sunday.

A Pin-Up Pal poster featuring comical cowpoke Six-Gun Sam on the back cover brings this week's issue to a conclusion.

After an absence of 17 weeks, Parachutist returns this issue for his final appearance.  The script explains that his crash-landing in Cheeky's attic is the reason that there is no Old Comic feature this week, although we know its non-appearance is actually due to the advertising/competition results.