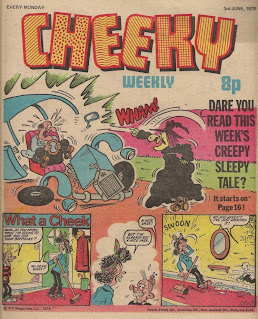 After several weeks in which the main cover pic has been specially drawn, this week we're back to a main pic featuring a blown-up panel from inside the comic - it's from the centre pages' Creepy Sleepy Tale. Below that, Cheeky's mum returns to the cover for a fourth time, on this occasion setting up another gag with her toothy offspring in What a Cheek.

6 Million Dollar Gran comes to the aid of a hot air balloonist in this week's episode, and half of page 8 is taken up with a list of winners of the Basil Brush competition that appeared in the 11 March 1978 issue.


This is the issue where Six-Gun Sam attempts to demonstrate his shooting skills, assisted by Goalie Cat who launches tin-can targets for Sam to aim at with his pop-gun.  Sam vows to attempt this feat every day until he hits a can, so of course he and his furry feline friend are seen every day.

On Tuesday, we are left asking the question - who is Neil Martin, then? 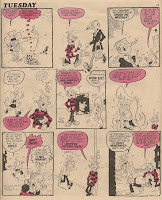 The Mustapha Million story owes something of a debt to The Beano's General Jumbo, as Mustapha's remote-controlled military men and vehicles bring a burglar to justice.  One would expect that Mustapha's unlimited funds would result in him having the latest technology at his disposal, yet the controls for his models are housed in a cabinet the size of a large fridge/freezer, while Jumbo's control device is a much more practical wrist-mounted panel. 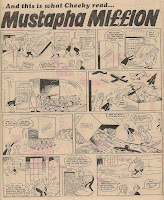 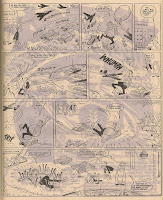 There's no Pin-Up Pal poster this week as the back cover contains a colour ad for Rotaplane, 'The great new flying machine'.

Sadly there is no pure Frank McDiarmid art in this issue.  Frank McDiarmid Pencils provide 8 Cheeky's Week elements, Jim Watson delivers 4, and Barrie Appleby furnishes us with the Wednesday conclusion.