Daft dairy deliverer Milkie first appeared in Cheeky Weekly's debut issue, and went on to appear in 41 issues in total.  He also made deliveries in the 18 February 1978 and 15 April 1978 issues of Krazy. 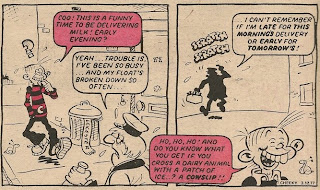 Cheeky's Sunday paper round was when the toothy funster most often encountered the mirthful milkman, but no matter when they met, you could bet that dairy-based humour was imminent.

Milkie's assistant made a one-off appearance in the 10 December 1977 issue.

In the 04 March 1978 issue, Cheeky snuck into the newsagent for his free James Bold read under the cover of the potty pinta purveyor.

On Friday in the comic dated 22 June 1978, Milkie leaves Cheeky a copy of The Mystery Comic in one of the empty milk bottles on the toothy funster's doorstep.  In the 06 January 1979 issue, Milkie finds a copy of the mysterious publication on his round and hands it to Cheeky. 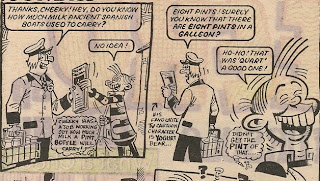 There must have been an 11-week strike at Krazy Town Dairy between Milkie's appearance on 24 June 1978 and his return on 09 September 1978, the longest gap between milk rounds. 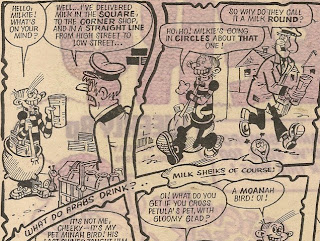 Milkie appeared on the cover in two issues.  In 11 November 1978's What A Cheek strip, the daft dairy deliverer was ensnared in one of Baby Burpo's fiendish front-garden traps, and in the Cheeky's Week strip on the cover of the 24 March 1979 issue we witnessed the terrible consequences of Milkie hiring Bump-Bump Bernie as his assistant.  In the comic dated 01 September 1979, Milkie took on Teacher as his assistant.

Milkie was absent from the 19 May 1979 issue, which carried a cover-mounted sachet of Kellogg's milkshake powder as a free gift.

Milkie made his final Cheeky Weekly delivery in the comic dated 12 January 1980.


Milkie - Number of appearances by Element


Milkie - Number of appearances by Page