From the pen of Ed McHenry comes this Christmas quiz which appeared in the 26 December 1981 issue of Whoopee! Almost 2 years after its absorption of Cheeky Weekly, Whoopee! was still featuring a considerable number of strips which originated in the toothy funster's comic. Thus, along with Cheeky himself and a number of Whoopee! stalwarts, Ed draws Louise, Paddywack, Charlie and Calculator, Teacher and kids from Stage School, Mr Smith (Cheeky's teacher), Jogging Jeremy, Baby Burpo, Gloomy Glad, Mustapha Million, 6 Million Dollar Gran and Auntie Daisy. Oh, and not forgetting the toothy funster's slithering sidekick, Snail.

If my maths and comic character identification skills are fully functioning, the scene features 17 characters who originated in Whoopee! or earlier merged titles not including Cheeky Weekly (don't forget to count Chip as well as Mike), and 19 who came from strips in Cheeky Weekly (don't forget to include Calculator). I think the cat and two characters representing Ali Baba's 40 thieves are just generic cartoon creations. 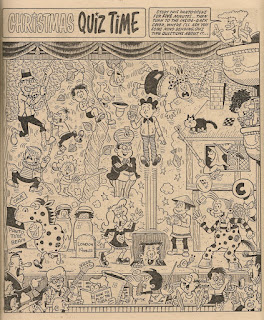