Whizzer and Chips dated 12 September 1987 saw our middle eastern mate embark on a sortie into enemy Whizzer territory for the first time since his 27 June 1987 raid on the recollection-deficient Bernie 'Memory' Banks. It has to be said that Mustapha doesn't make much effort to conceal himself, so you shouldn't have any trouble spotting him as he intrudes upon an uncharacteristically violent Sweet-Tooth. I don't remember boxes of wine gums ever containing cards of any type - in fact I don't remember boxes of wine gums at all. Tubes, yes and loose wine gums, but not boxes. Maybe the script writer was thinking of Rowntree's fruit gums, boxes of which were available when I was a kid, although not including cards as far as I know. However by the time this issue of Whizzer and Chips was published my days as a young whippersnapper lay far in the past so maybe there had been developments in the wine gum market of which I was (and remain) unaware.

This is the first time in Whizzer and Chips' post-Whoopee merge era that Sweet-Tooth has been raided by an ex-Cheeky Weekly character, but Mustapha was clearly exacting revenge for the confectionary-craving kid's previous intrusions into his strips in the issues dated 28 June and 23 August 1986. 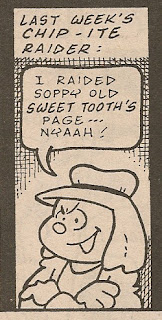