A week after raiding Joker, Mustapha Million himself fell victim to a retaliatory strike by one of the prankster's Whizz-Kid compatriots. Can you spot the intruder? Answer below. 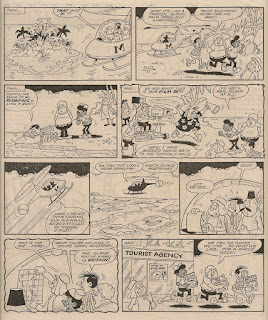 Yes, it's Sweet Tooth.  But did the sweet-scoffing scoundrel, clearly heading towards the nearest confectioner to satisfy his sugar addiction, nick some moolah off our middle eastern chum?

This is the ninth time that Mustapha has been raided, and the second occasion on which Sweet Tooth has been the interloper in our ex-Cheeky Weekly chum's pages (see here for the earlier incident).

The score at this point is; raids into Whizzer by our ex-Cheeky Weekly chums =  11, raids suffered by our pals = 21.