The above announcement was printed in Cheeky Weekly dated 18 November 1978, but there was no further mention of the popularity poll until the 27 January 1979 edition, in which the toothy funster updated us on the current state of voting... 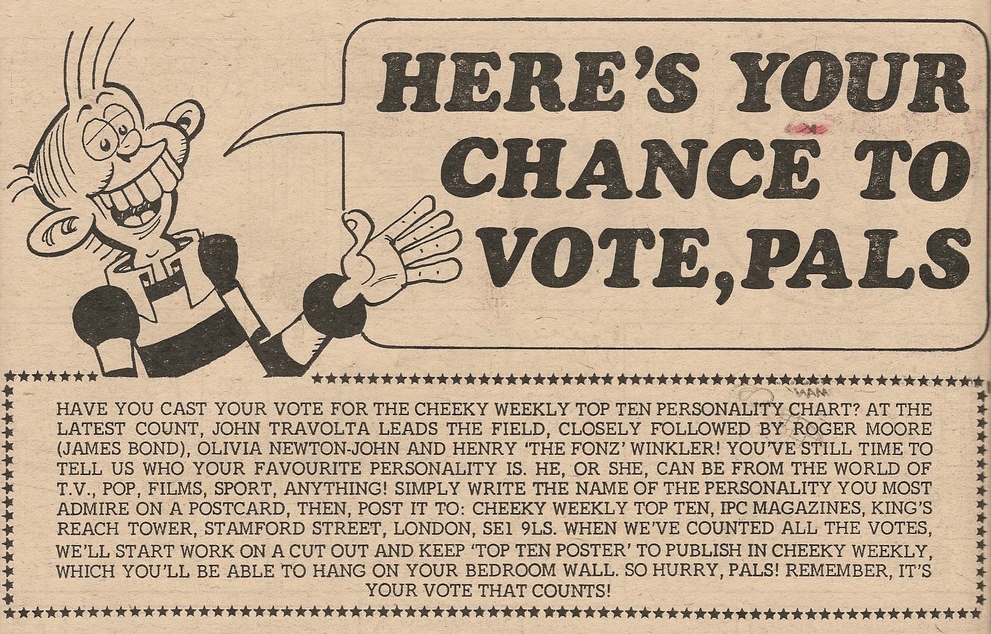 Front-runner John Travolta was at the time cresting a wave of UK popularity following his Saturday Night Fever (1977) and Grease (1978) film roles, as well as featuring with his Grease co-star, the third-placed Olivia Newton-John, on the hit single from the latter movie, You're the One That I Want, which topped the UK singles chart for 9 weeks in summer 1978. Second-placed Roger Moore (later Sir Roger) was of course the then-current James Bond, his most recent suave outing as 007 at that time being 1977's The Spy Who Loved Me. In fourth place was Henry Winkler, who portrayed Arthur Fonzarelli in American nostalgia-com TV show, Happy Days, an import that was very popular with UK viewers. The above announcement appeared again in the 10 and 17 February editions of Cheeky Weekly, and either the votes received in the intervening period maintained the relative positions of the 4 celebrities or else no further counts had been undertaken, as the placings remained the same as they had been when the announcement first appeared. Cheeky Weekly dated 31 March 1979 included the above ad, trailing the commencement of a promotion the following week that would encompass companion titles Whoopee! and Whizzer and Chips as well as the toothy funster's own comic. In terms of the characters featured, this ad is somewhat Whoopee!-centric, depicting as it does Sweeny Toddler and Daisy and Billy Bumpkin, all of whom were appearing in that title at the time. Why no representatives from Whizzer and Chips and Cheeky Weekly?

The constituent parts of Cheeky Weekly's Top Ten Poster appeared in the issues dated 7, 14, 21 and 28 April 1979, with the centre pages of each issue devoted to the poster. The parts were published in ascending order of popularity except in the case of the 7th position (Blondie) who were omitted from week 1 but included in the following edition.

Accompanying each instalment of the poster, but safely located towards the rear of each issue so that they would survive the extraction of the poster elements, were instructions on assembly, given by the toothy funster himself (along with Snail). Each of these instructions were slightly different to the others, beyond the expected adjustments relating to the part numbers. The 21 April 1979 instructions refer to the 'colour poster' which, although the pages featured coloured borders and text boxes, is not really an accurate description of the contents. 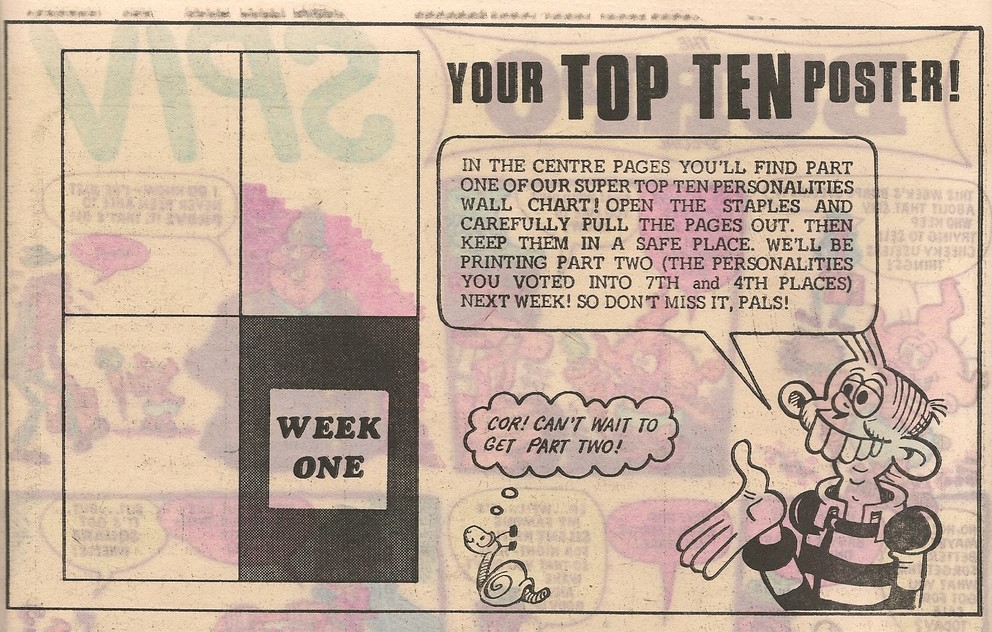 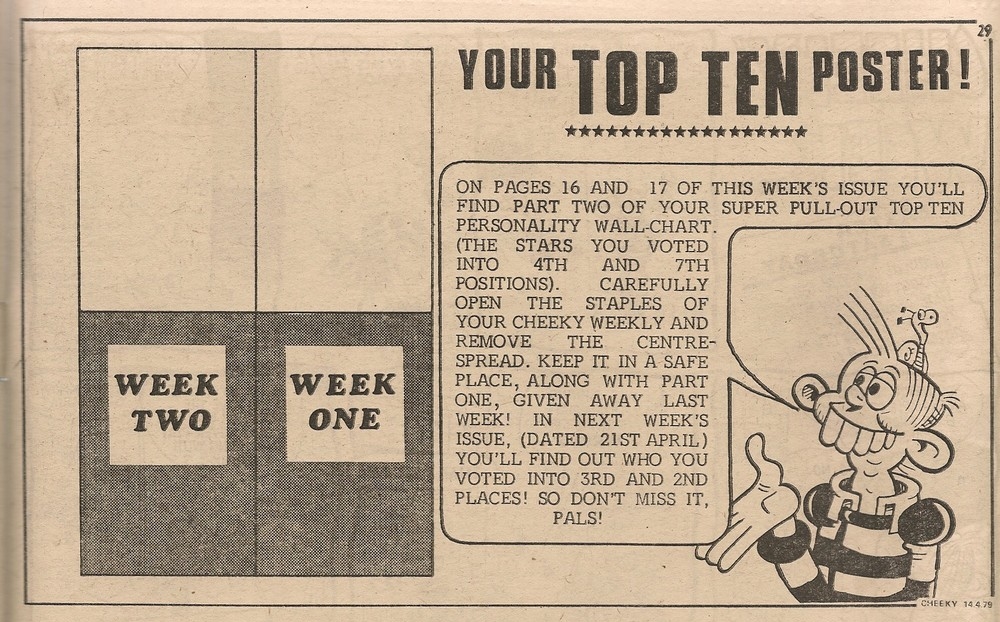 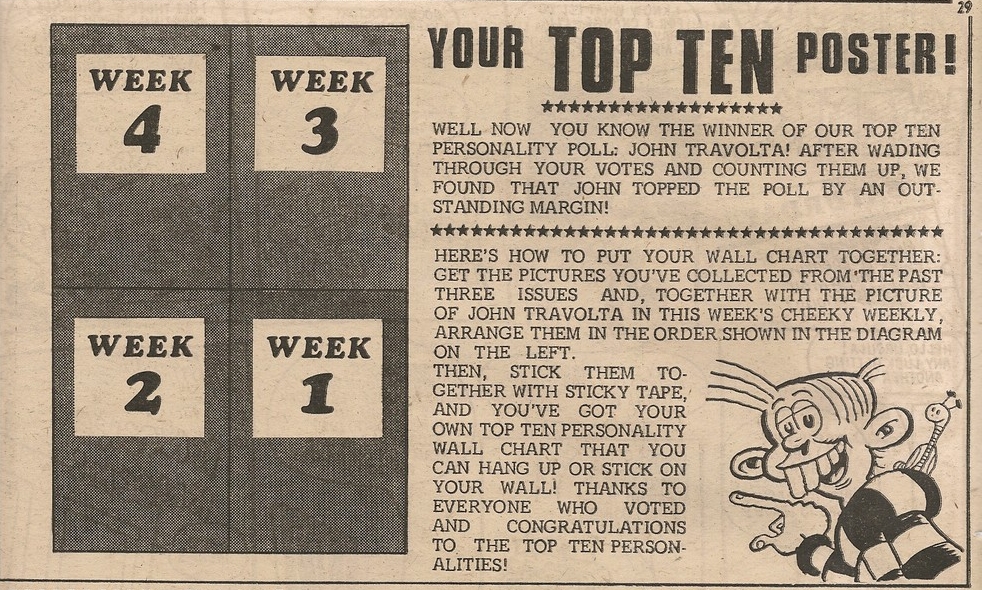 Here's what the poster looked like once the assembly instructions had been followed... 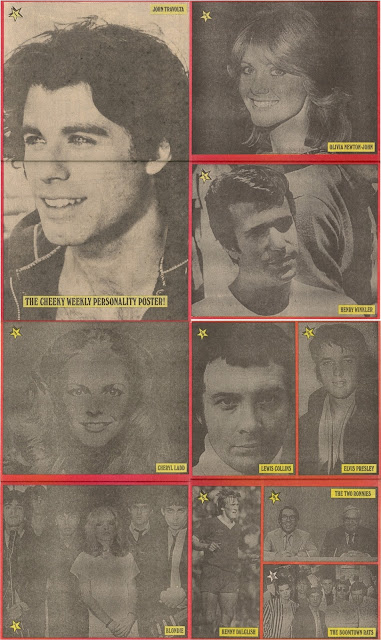 With the final part, the poster now styles itself The Cheeky Weekly Personality Poster despite the previous references to the Top Ten Poster. Sadly, due to the limitations of the somewhat basic printing process and the poor quality paper, all the celebrities, with the exception of John Travolta for some reason, seem to be peering out through a thick fog (I'm surprised Kenny Dalglish's match wasn't postponed, and The Two Ronnie's TV studio wasn't evacuated on the instructions of the fire marshal). I doubt whether this dull, depressing poster stayed on many bedroom walls for long.

But the big question is what happened to Roger Moore? From being placed at number 2 in the 27 January 1979 comic, he has completely disappeared from the rankings.

Also lost to posterity - comics that were cannibalised in order to assemble the poster would be depriving future comic historians of...