The phrase, coined in the early years of TV, “You'll get square eyes if you stare at that telly much longer...”, was uttered by parents in vain attempts to dislodge their cathode-ray tube-obsessed offspring from the sofa where they sat entranced by Tiswas, Doctor Who, the test card and just about anything that emerged from the flickering 405-or-625 lined box in the corner.

Thus was named Square-Eyes, Cheeky Weekly's box-goggler, who made his debut in issue number 47. So enamoured was he of the small screen that a portable telly was in his grasp at all times. Such an item was, in the late 1970s when most houses had only a single TV around which the whole family would gather at peak viewing times, something that most Cheeky Weekly readers could only dream of possessing. 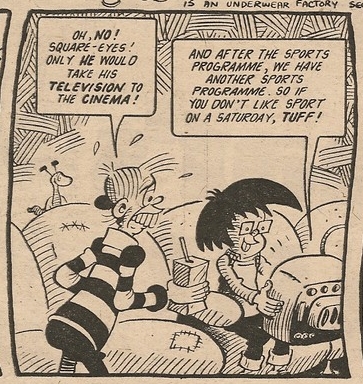 Square-Eyes made it to Cheeky Weekly's cover in the second week of the Friends of Cheeky Snap Game (13 January 1979). The juvenile TV addict was one of the characters featured on the cut-out cards, and one such card was included on the front page to promote the game. The same image of  Cheeky's TV-loving chum featured on the Pin-Up Pal poster included in the 17 February 1979 issue.


In the comic dated 27 January 1979 we learned that Square-Eyes had a family connection to the TV industry...

The avid small-screen viewer was the subject of The Burpo Special in the 17 March 1979 comic...


..and a page later Square-Eyes was the source of that week's edition of The Mystery Comic...

Square-Eyes' final Cheeky Weekly appearance was in the issue dated 19 January 1980, the 34th issue in which Krazy Town's telly addict had appeared, and just 2 issues short of the final edition.


Square-Eyes was created for Cheeky Weekly and never appeared in Krazy.