A month after being raided by Lazy Bones, Mustapha Million was approaching the end of his summer holiday, and enjoying a brief stopover at the Disneyland-esque (and reminiscent of Walley World as featured in the 1983 film National Lampoon's Vacation) Wishy World, when he was again subject to an unwelcome intrusion by one of those pesky Whizz-kids. Can you spot the miscreant in the story below? If your answer is 'nay', scroll down to discover the identity of the interloper. 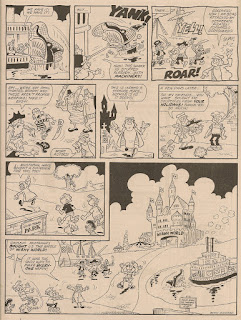 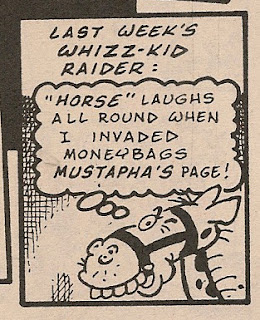 Yes, it's that mischievous mare, Winnie the Royal Nag, who was the first to coin the annoying phrase which was adopted by many of the subsequent gloating raiders of Mustapha's strip (I can't bring myself to type the offending slogan, so please see her previous raid on our middle eastern mate here). Mercifully, she didn't say it this time.