There’s a distinct air of deja vu about the cover of Cheeky Weekly issue number 110 – see the 13 October 1979 issue – as Cheeky shares an early morning gag with madcap medic Doctor Braincell. It seems the Doctor has changed his choice of Sunday paper since his last cover outing, although his order for two pints of Krazy Town Dairy’s finest gold top remains unaltered.


Over the page as Cheeky’s paper round continues, our toothy pal meets the purveyor of said creamy cornflake-accompaniment, Milkie, for a gag referencing Krazy Town’s genial GP.


Charlie was short of cash at the beginning of last week’s Calculator Kid, and this week despite hankering for fish and chips, our impecunious pal finds he’s only got enough funds for a portion of chips. To make things worse, Calc advises his young owner to hold off consuming his 'chippy aroma'-generating fried spuds while wandering around Krazy Town. Eventually the newspaper-wrapped snack goes cold and has to be disposed of but Calc's microchip machinations bring the tale to a happy, slap-up feed conclusion.

Friend of Cheeky and sci-fi fan Wayne Bruce, who had a letter published on the Chit-Chat page in the 13 January 1979 issue (and I'll repeat my joke that he’s probably a friend of Kent Clark) is among the lucky gag-writers for this week’s Paddywack page.


On Monday Cheeky has another encounter with the silly stethoscope-wrangler.


A nice Stage School set this week, with the added bonus of the rare sight of junior escapologist Houdanny liberating himself from his sack. 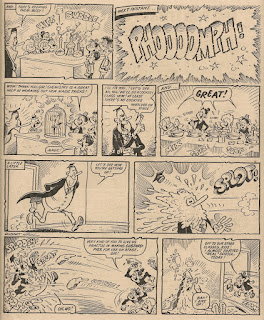 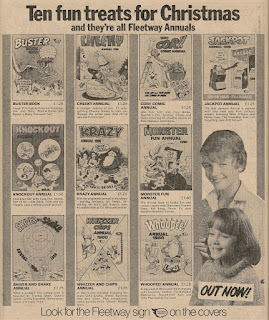 Pages 13 and 14 are the location of filler feature Cheeky’s Cut-Out Comedy Catalogue, this week consisting of Mechanic jokes, and the toothy funster shares a gag (not among those featured in the catalogue) with the comedic car-repairer on Wednesday.


Mustapha Million, enjoying a colour adventure this week, is concerned about his pal’s weight (calling him Beefy isn't going to help much, but anyway)… 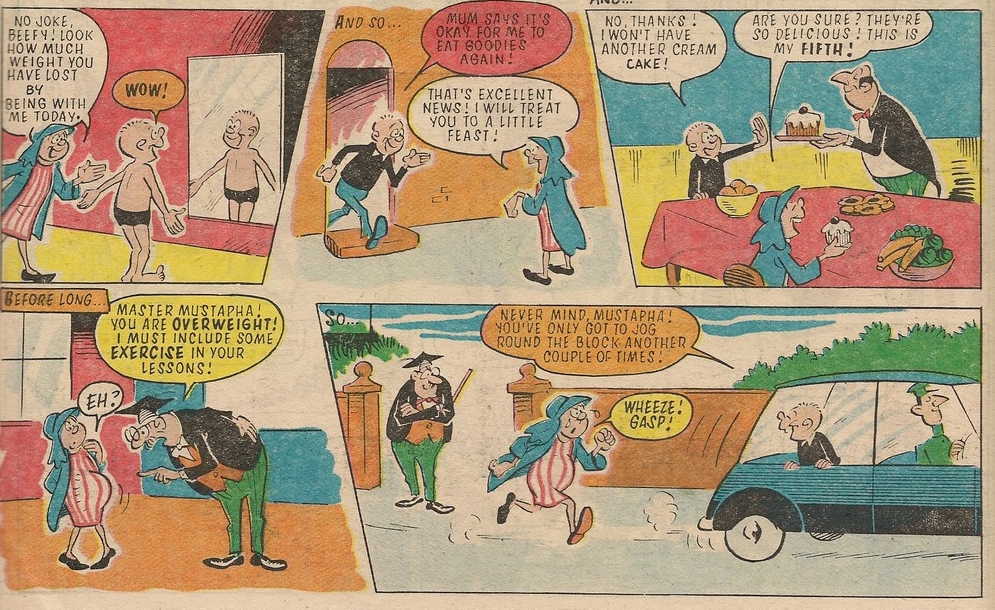 I can’t help feeling that our middle-eastern mate should have directed his exercise regime at the considerably heavier Tub, Mustapha’s erstwhile Mystery Comic colleague, who appeared a few pages earlier.

The normally vigilant Speed Squad fail to recognise Rex Press in this week’s story which can be seen here.

On the Chit-Chat page Cheeky concludes his series of articles about the creators of our favourite comic with a brief run down of the writers. Willie is presumably Willie Cook (whose real name is, according to Frank McDiarmid’s interview in Crikey! issue 12, Gordon Cook). I can’t put surnames to any of the others mentioned. 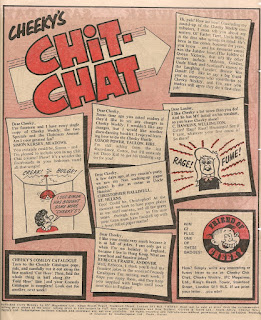 Cheeky’s Saturday afternoon is spent at the Krazy Town FC football match, where he meets the jolly journalist whom Speed Squad failed to recognise.

Once again Snail of the Century rounds off the comic, which for the second consecutive week has included an all-Frank McDiarmid Cheeky’s Week (the first time we've enjoyed 2 consecutive all-Frank issues since 04 and 11 August 1979).