Cut-Out features often appeared simultaneously across several of IPC’s humour titles, with in-house ads publicising the commencement of, for example, January 1978’s Spotter Books promotion running in Krazy, Whoopee! and Whizzer and Chips as well as the toothy funster’s comic or, a year later, the concurrent appearance of calendar, diary and snap game in Whoopee!, Whizzer and Chips with Krazy, and Cheeky Weekly respectively (Krazy had been subsumed into Whizzer and Chips as of April 1978). Buster, the venerable humour title from IPC’s line, often exempted itself from these promotions as for some reason, unlike its counterparts, it didn’t feature internal colour pages (one promotion in which Buster did take part was 1978’s Mini-Comic marketing scheme, but due to the lack of colour inside the comic, the teeny version of Cheeky Weekly which appeared in that title was entirely monochrome).

Curiously, the Giant Cheeky poster commenced a week after the Seaside Snap Game began in Whizzer and Chips With Krazy Comic. Quite why the two promotions weren’t synchronised is a bit of a puzzle. In Cheeky Weekly dated 11 August 1979 Disaster Des and Calculator Kid occupied the centre pages and earlier in the comic there was a 2-page Joke-Box Jury which surely could have been jettisoned to accommodate the poster. Buster didn’t present any cut-outs in the same period but that’s no surprise. I don’t know whether a cut-out feature commenced in the 11 August 1979 Whoopee!, but if it did there were no adverts for it in Whizzer and Chips or Cheeky Weekly. 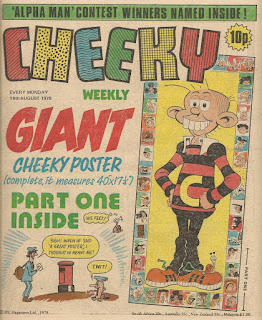 The canny Cheeky Weekly editor presented the four instalments of the Giant Cheeky Poster in ascending order from the toothy funster’s feet upwards, forcing readers to buy all four comics in order to obtain a full-length pic of our grinning pal, although fans of Snail were pleased to see the mirthful mollusc appear in the first week. The borders around the poster were comprised of small pictures of 44 members of the Cheeky’s Week supporting cast, all of which appear to have been specially drawn for the poster by Frank McDiarmid. Whoever applied the colours allocated the wrong skin tone to Disco Kid, and some of the colouring surrounding the border characters in the actual poster differed from that shown on the cover of Cheeky Weekly dated 18 August 1979.

A vast improvement on the earlier, dismal Top Ten Poster, this colourful offering undoubtedly adorned the bedroom wall of many a Friend of Cheeky.

Also lost to posterity – readers who chose to excise the Giant Cheeky Poster elements from their comics would be depriving future historians of...


Not to be confused with Pin-Up Pal posters.
Posted by Niblet at 15:15