In Cheeky Weekly dated 06 January 1979 IPC announced the imminent commencement of yet another of their cut-out-and-keep promotions in, as was often the case, more than one of their comic titles... 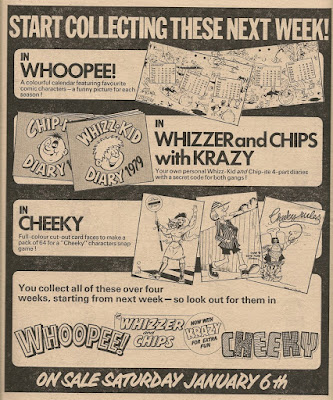 I’m not quite sure why IPC adopted a synchronised approach to this kind of promotion. Surely if these marketing campaigns were applied to one comic at a time there would be more chance of that title picking up a few new readers, whereas I would have thought it unlikely that kids (or their parents) would shell out for 3 comics in addition to the one they already followed. Or maybe IPC’s research showed a significant proportion of their target market already subscribed to more than one title. Or possibly they felt that disgruntled readers, annoyed at losing some of their favourite features in order to accommodate the snip-and-save pages, would be less likely to jump ship to another title for the duration of the promotion since they would be aware that the companion comics were similarly afflicted. However, there was the threat that readers would move across the great divide to DC Thomson's titles which, as far as I'm aware, did not include cut-out schemes.

As was often the case, Buster exempted itself from this promotion due to its lack of internal colour pages at the time.

Friends of Cheeky is a phrase that harks back to issue 2 of the toothy funster’s comic, but rather than referring to readers of Cheeky Weekly as it originally did, the friends alluded to in the name of this game were Cheeky’s pals, 15 of whom appeared, along with the toothy funster himself, on the ‘cards’ which were presented in the centre pages over a four week period.

10 of the images shown on the cards were taken from the Pin-Up Pal poster series which had been running since the comic’s first issue. Although Ursula, Jogging Jeremy and Louise had previously featured on Pin-Up Pal posters, their likenesses on the cards were sourced from elsewhere in the comic. The cards featuring Baker’s Boy, Dan-Dan the Lavender Man and Square-Eyes also re-used images that had originally appeared on the Cheeky’s Week pages, and were later used as Pin-Up Pal posters (see table below for details).


The 16 characters appeared on four cards each, with each group of four cards being printed together in a row on a single page, but with two characters to a page. The cards were printed in colour on the centre spread, which at that time was located within the pages of the Mystery Comic. Since readers of Cheeky Weekly were invited to believe that the Mystery Comic was, in Cheeky’s universe, a stand-alone comic, we can only ponder on how Cheeky rationalised finding himself featured on the centre pages of his reading matter of choice

The instructions for playing the game (for the benefit of those who had presumably never enjoyed a round of the at times rumbustious Snap and/or weren't buying Cheeky Weekly a year earlier) were printed on page 24 well away from the centre pages, in the issue dated 03 February 1979, which contained the final set of cards.

Also lost to posterity – readers who chose to remove the Friends of Cheeky Snap elements from their comic would be depriving future generations of...


...and Not to be confused with Silly Snaps, which appeared in the latter 3 editions listed above.