Whizzer and Chips dated 12 December 1987 saw the next raid to be perpetrated on Mustapha Million. But which of the Whizz-kid wanglers managed to worm their way into the proceedings? Scroll down to see the identity of the interloper. 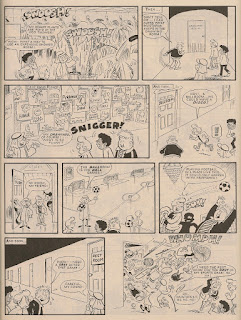 Yes, it's Whizzer's pesky prankster Joker, on his second raid into Mustapha's strip (the first having been in the 27 July 1985 comic). Our middle eastern mate had previously raided Joker in the 07 June and 16 August 1986 editions.

Frank McDiarmid's artwork on this Mustapha story is much more restrained than his Cheeky work, but no doubt that was the brief he was given by the Whizzer and Chips editor.