The final instalment of Cheeky’s brief foray into the movie industry, in Whoopee! And Cheeky dated 04 October 1980, coincided with the demise of the Cheeky Section in the centre pages of the comic. The toothy funster and his ex-Cheeky Weekly compatriots all survived the abandonment of the comic-within-a-comic concept, but Cheeky’s new strip (replacing his 2 previous features What a Cheek and Movie Masterpiece) was given a new name – it was evidently felt that the title It’s Cheeky, with which our grinning pal had commenced his career in Whoopee! and Cheeky, was too wordy, and as of the issue dated 11 October 1980 he embarked on a new series titled simply Cheeky. The title of the strip used the Cheeky logo which first appeared on the cover of the debut issue of Cheeky Weekly, and which had previously been used to denote the 'cover' of Whoopee! and Cheeky's Cheeky Section. This demotion of the logo to the title of a strip was one of the signals that the Cheeky Section concept had come to an end, the others being the displacement of the erstwhile Cheeky Section strips from their usual haunts in the 11 October 1980 issue, and the absence of any further references to the Cheeky comic from that date on.


The Cheeky series continued the original grinning-gagster-swapping-jokes-with-his-pals format that dated all the way back to the ‘Ello It’s Cheeky strip which began in Krazy in 1976. The film spoofs of the Movie Masterpieces ceased, but the new feature did differ slightly from the majority of the Cheeky strips we know from Krazy and Cheeky Weekly, in that they each had a theme around which to hang the wisecracks, and each was individually titled. The first ‘Cheeky’ strip was titled Get Your Skates On and it seems the editor wasn’t sure that long-term Whoopee! readers who weren’t familiar with the toothy funster’s supporting cast prior to the merge back in February 1980 had yet got to grips with the characters…

There were in fact 2 Whoopee! runs of the ‘Cheeky’ strip. The first run concluded in the issue dated 05 September 1981. Details of the second run  appear here.


All the ‘Cheeky’ strips in the original run, which spanned 48 consecutive issues, consisted of 4 pages and all were drawn by Frank McDiarmid, who included a different depiction of the toothy funster next to the title of each week's story. Frank continued the tradition of including references to himself from time to time, and on one occasion his own dexterous digits were on view. 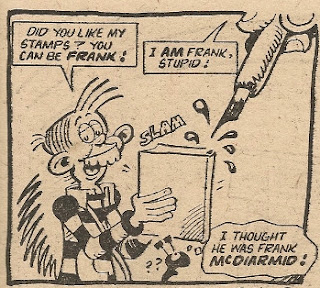 The strip in the 01 November 1980 edition titled ‘The Paper Round’, saw our toothy pal revive memories of the Sunday page in Cheeky Weekly, when he took over the newspaper deliveries usually undertaken by Bump-Bump Bernie (an aspect of Bernie’s life of which we hadn’t previously been aware), who had got his arm stuck in a letter box.

A number of the strips in this series concerned Cheeky's endeavours to arrive at school on time, something he rarely achieved.


Lily Pop appeared in every Cheeky strip in this initial run, making a topless appearance on one occasion...

...and the armed forces amusement level was raised by the introduction of two new characters... 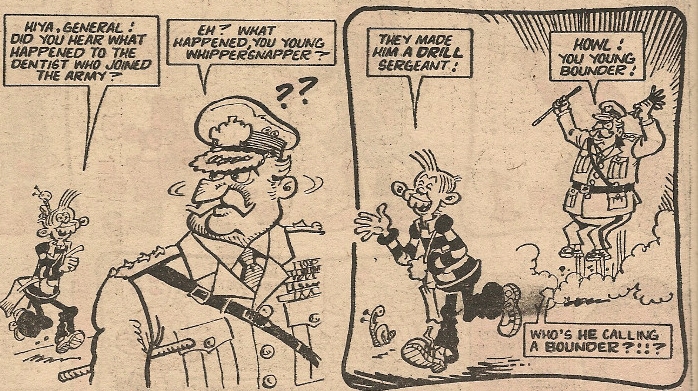 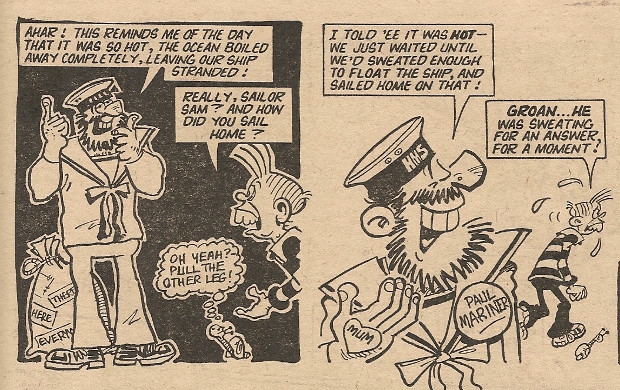 Paddywack also joined the supporting cast during this run.

In 15 August 1981's Clown Court, in which a jury presided over by Judge Cheeky was called upon to consider the charge that Whoopee! was not the funniest comic in the world, Frank McDiarmid had fun drawing some of the other characters appearing in the title (including the toothy funster's former Cheeky Weekly colleagues, Calculator Kid and the Stage School kids). This episode, depicting Cheeky in a role other than his normal persona, wouldn't have been out of place as a Movie Masterpiece. 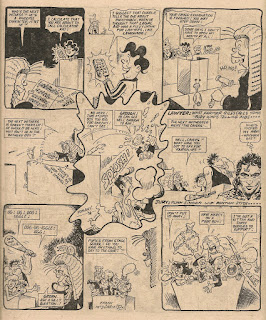 The Tower of Fun, in the comic dated 13 June 1981, included a page without individual panels, consisting of a number of gags delivered by an assortment of Cheeky's pals who were within the titular edifice. This 'panel-less page of gags' idea appeared several more times during this initial run, A variety of subjects occupied the page of gags, such as the toothy funster's supporting cast parachuting (Jumping for Joy, 27 June 1981, although Cheeky Weekly's Parachutist was not among them) or amusing signs in a shop window (Laughs in Store 22 August 1981). Cheeky returned to Titter Tower in the 25 July 1981 issue.

Whoopee! acknowledged its absorption of Cheeky Weekly until the 25 July 1981 issue (although all the strips that had been adopted from the toothy funster's comic continued to appear after that date), but the initial run of the Cheeky feature continued until 05 September 1981. In that edition the title of the Cheeky strip was All Change and the grinning gagster alluded to a forthcoming revamp of the comic and his strip.