Following Joker's infiltration of Mustapha's strip in Whizzer and Chips dated 12 December 1987, our middle eastern mate was untroubled by raiders until the edition dated 13 February 1988. Can you spot the sneaky interloper? The raider will shop himself below. 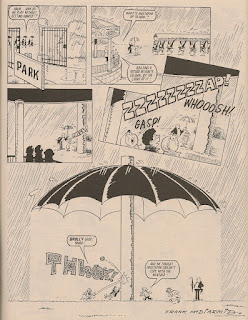 Yes, it's the resourceful retailer Bloggs, from the Store Wars strip. Sometimes it's clear that the raider has been pasted-in to the page, but on this occasion it looks to me as though Frank McDiarmid drew the infiltrator himself, as he obviously designed the panel to allow space for the Whizz-kid's (hardly a kid, I know) prominent appearance.

I wondered whether Bloggs' presence indicates that the scene takes place on the street in which his shop is located, but as Mustapha owns all the retailers on the rain-swept road, it clearly doesn't. Maybe Bloggs' shop is in an adjacent thoroughfare and he's just nipped out to survey the competition. I would imagine Mustapha's generous nature means the prices charged in his shops are very reasonable.

The sagacious shopkeeper had previously raided our middle eastern mate way back in Whizzer and Chips dated 04 May 1985.