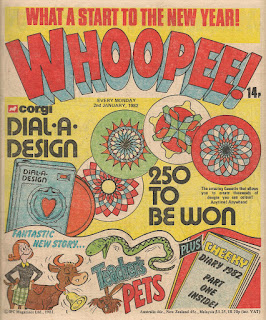 Whoopee!'s first edition of 1982, under the banner 'What a start to the new year!', announced on its cover a selection of inducements designed to attract new readers. First was a competition to win Corgi Dial-A-Design toys, followed by a plug for new strip Teacher's Pets, and finally the first part of the Cheeky Diary 1982, yet another in the long tradition of IPC cut-out-and-collect promotions, was heralded. Friends of Cheeky who had been reading their toothy pal's own comic back in late 1977/early 1978 would have memories of the Cheeky Diary 1978. That earlier cut-out-and-keep journal, drawn by Jim Petrie and spanning as it did 8 Cheeky Weekly pages over 4 issues, allowed only weekly entries to be recorded. However, the version for 1982 was allotted 16 pages over 4 weeks (with, as before, each comic page carrying 2 diary pages), facilitating daily diary entries. 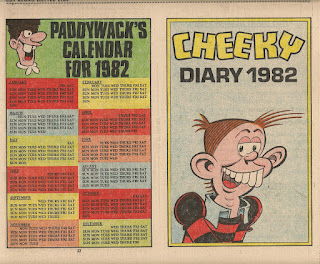 Since a month's worth of diary entries occupied one comic page (once excised from Whoopee!, the diary pages were designed to be folded in half before compilation), and the diary front and back covers took up a further page, there were an extra 3 pages which Frank McDiarmid put to good comedic use. The first of the extra pages featured a 'personal details' page which Cheeky had helpfully partially completed, coupled with the toothy funster's predictions for the coming year. The second consisted of a humorous take on the helpful information and memorable dates/anniversaries sections often appearing in diaries, while the third contained a spoof map of 'your town - or one very like it'.

Any Whoopee! readers who were not Cheeky fans (hey, it's possible I suppose) and were delighted when the amount of Cheeky content was halved in September 1981, would have been dismayed by the (as they saw it) intrusion of 4 pages of toothy funster-related material in addition to the 2 pages of Cheeky and pals in the 02 January 1982 edition, and 3/4 of a page of Cheeky's Week in the subsequent 3 issues (the bottom 1/4 page carried the instructions for compiling the diary). However those in the anti-Cheeky camp may have been more favourably disposed towards the diary if they were in need of somewhere to record their daily doings

Each month was encapsulated by a Frank McDiarmid cartoon at beginning and end.

The fourth and final instalment of the diary was printed in Whoopee! dated 23 January 1982.
Posted by Niblet at 16:58