A week after Bloggs gatecrashed his strip for the second time, Mustapha exacted revenge on those pesky Whizz-kids. Can you spot him on his trip into enemy territory? 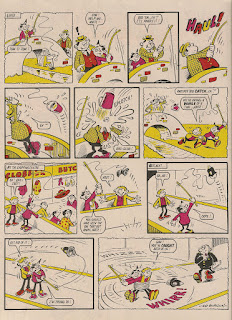 I say, Mustapha, that's uncharacteristically coarse language! Those rough Whizzer and Chips types are having a bad influence on you. Despite this, I have chosen to believe that, contrary to all appearances, it was Joker's pal and not you who attached the bucket to the fishing line.

Mustapha had previously intruded upon the buttonhole-squirter-sporting Whizz-kid prankster in the issues dated 07 June and 16 August 1986, while Joker had raided our affluent chum in the 27 July 1985 and 12 December 1987 editions.