During our toothy pal's appearances in the first run of his eponymous strip in Whoopee! and Cheeky, he also turned up in 2 special features, the first of which I examined back in 2014. So if I may I'll direct you here to read about the Cheeky Valentine Cards in the 14 February 1981 issue. 4 pages of that week's edition were devoted to the amatory tokens which meant that, along with the same issue's 4-page 'Cheeky' strip, readers were either subjected to, or enjoyed (depending on their disposition towards the jerseyed japester), 8 pages of grinning-gagster-related jocularity.

4 months after the Valentine's Day issue, Cheeky's Special Crossword made a one-off appearance. Although this was clearly a filler (featuring another use of what I refer to as the Standard Cheeky Face, an image etched into the memories of many of us due to its association with the disturbing 'left hand on right arm' outings of our toothy pal), a smattering of clues did relate to Cheek's universe. 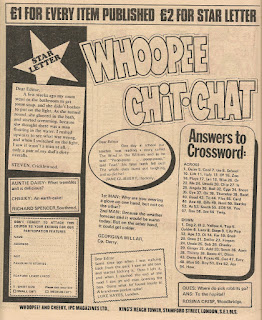