Goodbye Whoopee (and Gran and Paddywack).

By the late 1970s comic publishers had largely abandoned the custom of announcing a title's demise with a front-cover banner reading 'Great news inside, pals!'. Although a merging of two comics was inevitably given a positive spin, more subtle methods were employed on the front page to prepare readers for the imminent termination of their funny paper.

Thus readers of the 30 March 1985 issue of Whoopee could have been forgiven for missing the significance of Sweeny Toddler's 'Me's got to fly – tell you all about it inside' front page message, tying in as it did with the kite element of that week's Sweeny story. However, the cold facts were revealed on the centre pages – after a respectable 11 year presence on the newsagents' shelves Whoopee, which had lost its exclamation mark when it absorbed Wow! in 1983, had reached the end of its run and would be merged into Whizzer and Chips the following week.


At this point it was 5 years since Cheeky Weekly had failed and been merged into Whoopee. Surprisingly, despite the subsequent incorporation of Wow! into Whoopee, the majority of the strips to transfer from the toothy funster's comic had survived to Whoopee's final issue in one form or another.

Let's have a look at their pages from this final issue of Whoopee...

Stage School, something of a latecomer to Cheeky Weekly where it commenced in July 1979, was one of the strips fortunate to make the transition to Whoopee and it continued, without lapsing into reprint, to feature on 2 pages every week up to the final issue...


Although Stage School did appear in Whizzer and Chips, it can't really be said that the feature survived the second merge, as the strip made just two appearances, in the 20 April 1985 and 13 July 1985 issues of Whizzer and Chips including Whoopee, both in the Chips section.

6 Million Dollar Gran had undergone a number of alterations since being welcomed into Whoopee. The first change was the subtle amendment of the strip's title from 6 Million Dollar Gran to $6000,000 Dollar Gran as of her first Whoopee appearance. The first major overhaul came when the synthetic senior citizen was hired as nanny to a group of kids and the strip was renamed Robot Granny. The second big change saw Gran became leader of a group of pensioners when the strip was retitled Gran's Gang, from which point her robotic nature was no longer apparent, and her weekly adventures were reduced to a single page.


Gran was another casualty of the merger.

Mustapha Million continued to appear until the final Whoopee, although he had reverted to reprints of his Cheeky Weekly exploits as of April 1984. On occasion the reprints were edited down from two pages to a single page. At first these reprints featured retouched speech balloons, squared off to match the Whoopee style, but later these alterations were dropped, as can be seen from this reprint in Whoopee's final issue...


Mustapha's strips in Whizzer and Chips commenced with a page containing a single row of new art recounting how he came by his wealth, underneath which was a cut-down reprint of his adventure from Cheeky Weekly dated 03 February 1979. The reprints continued until new adventures of the middle-eastern moneybags began in February 1986, drawn by Robert Nixon before artwork duties were handed over to Barry Glennard and then Frank McDiarmid.

Calculator Kid had appeared throughout Whoopee's post-Cheeky-merge run, and had generated a spin-off, Calculator Corner (although absent from the final Whoopee).


In the case of Charlie Counter and his silicon-chipped sidekick, there is no conclusion to his adventures in the final Whoopee, as he survived the merge and continued to appear in Whizzer and Chips, as did Calculator Corner for a while. Eventually, however, Calculator Kid lapsed into reprints of his Cheeky Weekly adventures before the strip was dropped.


Paddywack was by this time reduced to a single row of panels on Whoopee's Quick Strips page, as was Cheeky, whose circumstances had been considerably reduced since he featured on four pages per week in his own comic section immediately after Cheeky Weekly merged into Whoopee. Paddywack didn't survive the merge into Whizzer and Chips. Cheeky didn't survive as a solo strip, but he continued to appear in Whizzer and Chips as a member of The Krazy Gang, who had been appearing there since Krazy merged into it way back in April 1978.

In addition to the strips above, there were additional appearances by ex-Cheeky Weekly characters in the final Whoopee...

In an attempt to lure any loyal Whoopee readers reluctant to make the transition to Whizzer and Chips, the final Whoopee contained the first part of a competition that would continue in W&C the following week.

So how were the readers of Whizzer and Chips informed of the imminent arrival of the Whoopee refugees? Well, there wasn't anything on the cover of the pre-merge issue to make readers suspect something significant was in the offing.


Whizzer and Chips had at this point existed for 15 years, since the beginning styling itself as '2 comics in one', with the Chips section appearing within Whizzer. Readers were encouraged to separate the two comics and there was friendly rivalry between those readers who preferred the Whizzer section (referred to as Whizz-Kids and led by Sid of Whizzer's Sid's Snake cover strip), and those who favoured the Chips section (dubbed Chip-ites, who followed Shiner, the cover star of Chips).

Apart from some cryptic references on Sid and Shiner's pages, it wasn't until the centre spread that the fateful news was announced, in a nice set by Frank McDiarmid where the Whizz-Kid and Chip-ite leaders, in a process familiar from team games in all school playgrounds, selected their recruits from among the new arrivals. The two Whoopee survivors who had originated in Cheeky Weekly and became weekly features in their new home were both to become Chip-ites. The above strip was not entirely honest about the number of inductees - it neglected to mention Bleep who transferred into the Chips section the following week (this omission was presumably to allow an even amount of divvying up by Sid and Shiner). Also not mentioned explicitly was the Calculator Corner puzzle feature that moved into Chips along with Calculator Kid. 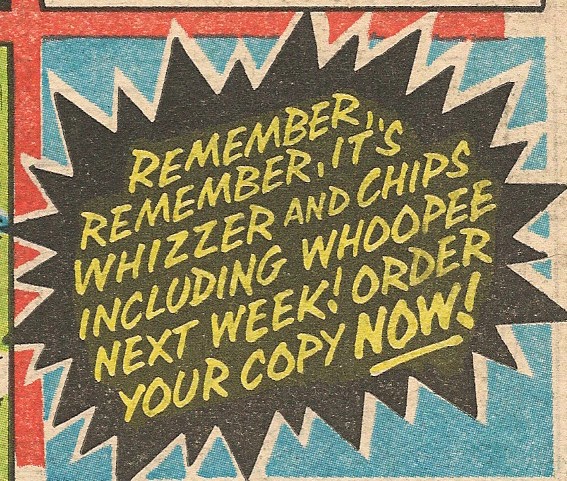 P.S. Any Family Trees fans keen to see more of 'The Saplings' who were introduced in Whoopee dated 24 November 1984 will be disappointed to learn that despite a caption promising they would return, the tiny trees were never seen again.
Posted by Niblet at 14:53